Showing posts from July, 2010
Show all

Book Review of The Red Tent by Anita Diamant


Summary:
Her name is Dinah. In the bible, her life is only hinted at in a brief and violent detour within the more familiar chapters about her father, Jacob, and his dozen sons in the Book of Genesis. Told in Dinah’s voice, this novel reveals the traditions and turmoil of ancient womanhood-the world of the red tent. It begins with the story of her mothers-Leah, Rachel, Zilpah and Bilhah-the four wives of Jacob. They love Dinah and give her gifts that are to sustain her through a hard-working youth, a calling to midwifery, and a new home in a foreign land. Dinah’s story reaches out from a remarkable period of early history and creates an intimate, immediate connection. Deeply affecting, The Red Tent combines rich story-telling with a valuable achievement in modern fiction: a new view of biblical women’s…
Post a Comment
Read more

Book Review of #2 Twenty Years After by Alexandre Dumas

Name of Book: Twenty Years After
Author: Alexandre Dumas
ISBN: 0-7607-9112-0 or 978-0-7607-9112-7
Publisher: Barnes and Noble
Type of Book: Young adult-adult, France, historical, 17th century, one of French classics?
Year it was published: (Original in 1845 in French, this version 2008)
Part of a series: D'Artagnan Romances
Summary: Twenty Years After (1845) resumes the adventures of Alexandre Dumas’ fabulous four begun in The Three Musketeers. “The Inseparables”-Athos, Porthos, Aramis and the irrepressible Gascon d’Artagnan-are once again called upon to save France from itself. This time, the paragons of honor, chivalry, and justice find themselves embroiled not only in court intrigue and royal affairs (including the Queen’s illicit liaison with her first minister, Cardinal Mazarin) but also popular revolution. The novel is set during the minority of King Louis XIV; the English Revolution is about to reach its climax in the execution of Charles I-and the revolt against the French crown …
Post a Comment
Read more

Fast Paced Novel Name of Book: The Three Musketeers
Author: Alexandre Dumas
ISBN: 1-885326-040-1
Publisher: Wordsworth Classics
Type of Book: Young adult-adult, French classic, 16th century, Louis XIII
Year it was published: (Original in 1844 in French, this version 1993)
Part of a series: D'Artagnan Romances
Summary: The Three Musketeers is one of the most celebrated historical romances ever written. It tells of the adventures of the hot-headed young Gascon, d’Artagnan, and his three companions Athos, Porthos and Aramis. In their gallant defence of the Queen of France, Anne of Austria, they pit their wits and their swords against the machinations and men of that archetypal eminence grise, Cardinal Richlieu, as he schemes to hold on to his political influence over King Louis XIII. Their swashbuckling adventures take them from the high fashion of the French Court to the murkier aspects of espionage on either side of the Channel in a thrilling story of seventeenth century international int…
1 comment
Read more

Book Review of #1 Cloud of Sparrows by Takashi Matsuoka

A different Japan Name of book:  Cloud of Sparrows

Debut novelist Takashi Matsuoka burst onto the secen with CLOUD OF SPARROWS, a magnificent historical novel that takes us beyond the epic tradition of James Clavell’s Shogun. Set in 1861 Japan, CLOUD OF SPARROWS weaves a tale of passion and adventure, as a small group of American missionaries arrives on the shores of Edo Bay-and enters the strange, exotic world of Genji, Lord of Akaoka. What happens next, between the handsome young nobleman and the two Americans, sets the stage for a remarkable adventure. For as this unlikely band embarks on a journey through a landscape bristling with danger, East and West, flesh and spirit, past and future, collide in an ovel of astounding power and grace…

Book review of #8 Dance of Death by R.L Stine

Type of book: Young adult/children, horror, attempt at being historical

Year it was published: August 1997

Part of the series: Fear Street Sagas #8 Summary:
After the bizarre deaths of her parents, Madeline never expects to feel happy again. Then she falls in love with Justin FIer, a handsome young doctor. She is warned away from Justin by a young man no one else sees, and an old woman everyone thinks is crazy. They tell her Justin is a man driven by an evil quest that destroys any woman who dares to love him. Is it too late? Can Madeline escape the curse of the Fears?


Characters: The main character in this novel is Madeline Simms who lost her family recently and goes on to live with some cousins. Madeline can be described as brave and fearless to do what is needed to be done. She also has a great intuition, although she also lets others easily talk…
Post a Comment
Read more

Book Review of The Lost Mind by Christopher Pike

Composition of a Soul The title: The Lost Mind

Characters: This novel is written in a first point of view from Jennifer. I enjoyed the characters a lot, everyone had interesting personality traits and were likable. Everyone also plays a part in one way or another. Jennifer can best be described as resourceful and brave, as in all of Pike's female protagonists, and isn't afraid to do what she can so evil can be stopped.

Theme: Pike, in my opinion, seems to be kind of obsessed with the idea of mystery of the soul, what the soul possesses and what secr…
Post a Comment
Read more

Book Review of The Immortal by Christopher Pike 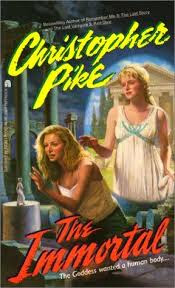 Type of Book: Young adult although anyone can enjoy it, historical, modern, Greece, Greek myths, fantasy

Summary:  Josie is on vacation in Greece with her father, his new girlfriend, and her best friend. While visiting the sacred island of Delos, she accidentally stumbles upon an artifact-a tiny statue of a Goddess. Immediately Josie is enchanted by the statue and she takes it with her when she leaves the island. Then the trouble starts. A guy takes her for a boat ride and she is almost killed. Then the image of the Goddess begins to haunt her dream. The goddess wants something from Josie that she doesn’t want to give. The immortal wants to be mortal. The Goddess wants Josie’s life.
Characters: The characters within this book are round, in particular the main character Josie Goodwin. She is best described as adventurous and fearless…
Post a Comment
Read more

The Landscape of Twilight
Twilight is written by Stephenie Meyer, and seems to have become a mania obsessive novel for women (and men) about an ordinary boring girl named Mary Sue*...oops, I meant Bella Swan, and how she meets and falls in love with a guy named Gary Stu (there I go again, I meant Edward Cullen). Umm, does this have a plot? The length suggests yes, but reading the novel, nope. This was published in 2005 by Little, Brown located in New York. ISBN: 0-316-01584-9 This novel is marketed towards everyone and appeals to almost everyone. The people who will dislike this novel are ones who read all sorts different books and possibly ones who have very very high degrees. (This novel should also appeal to women who love purple prose about nothing but men's bodies.)
My first encounter with this novel happened few years back when I transfered from a two year college to a four year university, by a friend who loved it and read it, (and a former who hated the novel). Back then I…
1 comment
Read more

Books that will be reviewed eventually

Books I am reading at the moment:Gone with the wind by Margaret Mitchell'Till Morning Comes by Han SuyinThe Mysteries of Udolpho by Ann RadcliffeThe Vicomte de Bragelonne by Alexandre DumasLittle Women by Louisa May AlcottThe Foreign Student by Susan Choi
Post a Comment
Read more
More posts