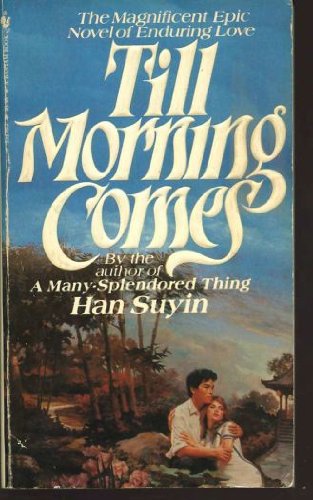 Name of Book: 'Till Morning Comes

Alone in exotic Chungking, beautiful foreign correspondent Stephanie Ryder is warned to keep silent about the atrocities she witnesses in the city’s teeming slums. Defying a brutal Kuomintang officer, she is swept to an electrifying first meeting with Dr. Jen Yong, a handsome, dedicated and compassionate Chinese surgeon. For Yong, a sexual liaison with an American woman could mean a death sentence. For Stephanie, an affair with an Asian man would cause an irreparable breach with her Texas millionaire father. But just when danger threatens to separate them forever, their passion bursts into flame…and carries them on a fabulous romantic journey from the stormy depths of fear and desire, to the moving affirmation that enduring love is truly a many-splendored thing.

Characters:
If you're a girl and you read it, you probably will not be able to prevent yourself from falling in love with Jen En Yong, although there is a part of you that might see him as a "coward" (as he calls himself.) Jen Yong is a talented doctor who is attracted to Stephanie Ryder, a journalist. Although both characters seem a little too perfect at the start, and their relationship seems an ideal, as you read, you will quickly see the cracks start to appear and their relationship weathering the hurricanes that crash the coast. Stephanie has her "flaws" (at least in Chinese definition, although Yong fell in love with her because of them,) and Yong has his "flaws" (in American definition. Stephanie did fall in love with him, but I think later on the flaws really got on her nerves.) There are also many secondary characters such as Liang Little Pond, or the Family (Yong's family). Han Suyin doesn't rely on stereotypes or caricatures. Everyone is drawn fully and given different personalities.

Theme:
The ultimate theme in the book is the idea of losing self while living in a foreign country, and also a struggle with border over how much allowances she should make for Yong.

Plot:
Even though most of the book is from Stephanie's point of view, the main character in there is Yong. The title comes from his letters "[Yong writes Stephanie a letter but never sends it.] 'You are the bird of morning, and till morning comes I shall wait for you, happy because when I close my eyes you are there, just under my lids.' (479)" The book may be long (620 pages) but it's a well-worth read. It also has a strange Gone with the Wind quality to it. (The book is not Gone with the wind, Yong is not Rhett Butler, and Stephanie is not Scarlett O'Hara,) but there is something intangible that reminds one a little of it.

Han has also been influential in Asian American literature, as her books were published in English and contained depictions of Asians that were radically different from the portrayals found in both Anglo-American and Asian-American authors. Frank Chin, in his essay "Come All Ye Asian American Writers of the Real and the Fake", credits Han with being one of the few Chinese American writers (his term) who does not portray Chinese men as "emasculated and sexually repellent" and for being one of the few who "[wrote] knowledgeably and authentically of Chinese fairy tales, heroic tradition, and history"
(From Wikipedia)

Opinion:
On December 19th, 2006, ten months after my Chinese "boyfriend" played a disappearing trick on me, my friend and I were at Goodwill looking at books. I perused through the books, not looking for anything in particular. I think we were about to leave when a cover caught my eye; an Asian male holding on to a white female. I got excited and along with Cynthia Freeman's book Portraits, bought both of them. I think I had some false starts reading the book but as of today, I believe I have read it three times. The book was very informative on Chinese history and culture, although I didn't appreciate Russia-bashing they have done. If one is wondering, yes it does explain the mindset of a Chinese guy and does say a few do's and dont's when it comes to relationship. I had a hard time disliking Stephanie towards the end of the book (if you'll read it, you'll see why...) and found myself sympathizing with her position, especially the hell she went through when she lived in China. I honestly would have wanted the author to continue writing this story up until modern day, even beyond 1982. (Would have been interesting to read about Tiannemen Square Massacre and whatnot.)

(0: Stay away unless a masochist 1: Good for insomnia 2: Horrible but readable; 3: Readable and quickly forgettable, 4: Good, enjoyable 5: Buy it, keep it and never let it go.)