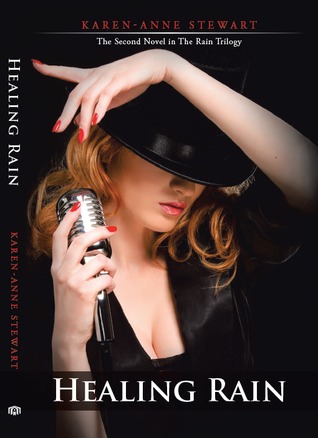 Part of a Series: The Rain Trilogy

Shattered when Raina runs after his marriage proposal, Kas is hell-bent to find her and bring her home, where she belongs. He will bend every law necessary to do so, willing to do anything to protect Raina from her demons and the men who haunt her, going as far as placing his career and life on the line to save hers. Raina will give up everything she has worked so hard to achieve, even flee the country to keep Kas from the wrath and powerful reach of her abusive father.

In the midst of the FBI team closing in on the Ghost, another ghost from Raina's past taunts her, promising that she will be his. Meanwhile, a different trafficking ring is gaining strength in New Jersey. Michael solicits Raina's help, needing her smooth, sultry voice to win the audition for the new singer in the ring leader's swanky night club. Raina knows her life is in jeopardy with the dangers of being undercover, but she is blindsided when she discovers that it's her heart that is threatened with a mortal blow.

Raina tries to heal from the nightmares of her dark past as the grisly bodies of innocent victims surface when the team gets closer to discovering the identity of the man responsible for the infuriatingly clever and powerful slavery ring. When Raina finally comes face to face with the Ghost, he quickly engulfs her in a twisted game of cat and mouse, delivering a veiled threat as he slips through her fingers. As the ghosts of her past and present ensnare her in their deadly web, Raina realizes the danger has just begun.

***Disclaimer: Due to sensitive issues of abuse, human trafficking, and adult scenes, The Rain Trilogy is intended for readers 18+

Raina is much more self-confident and independent in this book than in previous one. She still has moments where she feels bad about herself, but she doesn't let them get her down. She is stubborn, determined and she trusts Kas fully enough to argue with him about what she desires to do. In the previous book Kas strikes me as a sweetheart who does whatever he can for Raina, which sort of caused him to adopt a father/big brother role. In this book he seems to struggle with a need to protect Raina while at the same time letting Raina make up her own mind. We also learn more about Kas's team of agents as well as more about the mysterious Prizrak and whom he could possibly be.

There's a fine line between control and safety.

Its written in third person narrative from both Raina's and Kas's points of views. Unlike the first book there is action, surprises, and a woman ready to come out to do whatever is necessary. One thing that did nag at me from time to time is that Raina seems to be needed rescued by men in her life, although to her credit she does have her own mind and isn't afraid to stand up for what she believes is right.

I am a new author and have recently discovered that I am now addicted to writing. My first novel, Saving Rain, was originally going to be a single novel, but it quickly turned into a trilogy. I fell in love with the characters and had to continue with the story to delve more into their intriguing, dangerous lives. The Rain Trilogy is a powerful story of abuse, human trafficking, and beautiful, redeeming love (new adult contemporary romance suspense meant for readers 18 and older). Saving Rain and Healing Rain are live now, and After the Rain will be live by the end of October 2013.
I live in the mountains with my family, and I love to read, hike, and travel when I am not writing. I am a sucker for romance, especially a book with a strong alpha male who has a sensitive side. I also enjoy a good mystery and thrillers. My favorite author is James Patterson, he is an amazing writer.
With being a newbie, I am just learning all the ropes, but I'm loving the wild ride. I plan on writing for as long as my fingers have dexterity.

I would love to connect with you!

This is much better written and more suspenseful than the first book, although I struggled with understanding about why Kas seemed temperamental when it came to Raina. Although I liked the first book a lot, there was lack of action and suspense for me, and I do hope that I understand it now: the first book focused a lot on Raina's growth and it showed her how relationships truly are as well as how they work. The second book focused more on the job they had to do as well as Kas struggling with letting Raina go. What I mean by that is that there was a power struggle of sorts between them, with Kas adopting a protective role for Raina, while Raina has her own mind and thoughts that she desires to use. Kas did own up to his mistakes and he does apologize to Raina frequently.

Quick notes: I would like to thank the author for the opportunity to read and review the book.Disclaimer: Due to sensitive issues of abuse, human trafficking, and adult scenes, The Rain Trilogy is intended for readers 18+

4 out of 5
(0: Stay away unless a masochist 1: Good for insomnia 2: Horrible but readable; 3: Readable and quickly forgettable, 4: Good, enjoyable 5: Buy it, keep it and never let it go.)