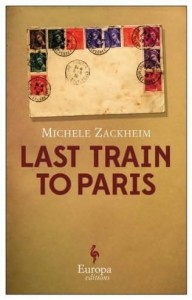 Inspired by the story of a distant cousin who was murdered in Paris in 1937, award-winning author Michele Zackheim’s Last Train to Paris is a gripping epic about a half-Jewish female reporter from Nevada who writes for the Paris Courier in the 1930’s. The sole woman in the newsroom, she lives with both sexism and anti-Semitism. Then she meets Leo, a German radical and anti-Nazi and realizes that while Paris is interesting, the truly vital historical story is taking place across the border. Rose undertakes an assignment in the Berlin press office, where she is initially happy and in love until Kristallnacht and the growing threat of Nazism. When World War II is declared, Americans are forced to leave the country and Rose must make an agonizing choice: Who will go with her on the last train to Paris?

Zackheim, acclaimed author of Einstein’s Daughter, tells her story from vantage point of Rose as an elderly woman, Last Train to Paris is at once a historical epic, a love story, and a psychological portrait of one woman’s gradual discovery of who she really is after years of being invisible to herself.

Last Train to Paris will enthrall the same large audience that made In The Garden of Beasts by Erik Larson and Suite Française by Irène Némirovsky bestsellers.

The main character would be Rose as well as her mother. Rose's mother is Jewish, while her father is Catholic, and she is best described as brave and willing to do whatever she can for those less fortunate than she. She is also ambitious and is determined to do whatever she can at all costs. There is a lot going on in the book which means that I didn't really get to know Rose or people surrounding her and I don't have a positive sense of her. Also, up until she is eight, she never knew she was Jewish. Rose's mother, Miriam, is best described as an enigma. She never liked being Jewish and did her best to distance herself from those roots. Miriam is selfish, self-hating Jew, and is willing to destroy her daughter's happiness at any cost. I honestly can't think of anything positive about her. There are a few other characters but they didn't play a huge role in the book like Rose and her mother have.

Events are bigger than human struggles.

Its written in first person narrative from Rose's point of view and takes place in Europe and in America, the particular years would be 1930s prior to Kristallnacht in Europe, how and why she became a reporter as well as trying to cope with being Jewish in this type of atmosphere and trying to deal with family she knows little about and so forth. Despite the first person narrative, I really do feel that I don't get to know Rose a lot, and I have to wonder whether or not she became more accepting of being Jewish or did she remain the same? 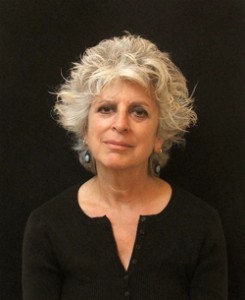 
Michele Zackheim is the author of four books.  Born in Reno, Nevada she grew up in Compton, California. For many years she worked in the visual arts as a fresco muralist, an installation artist, print-maker, and a painter. Her work has been widely exhibited and is included in the permanent collections of The National Museum of Women in the Arts in Washington, D.C.; The Albuquerque Museum; The Grey Art Gallery of New York University; The New York Public Library; The Hebrew Union College Skirball Museum, and The Carlsbad Museum of Art. She has been the recipient of two NEA awards, and teaches Creative Writing from a Visual Perspective at the School of Visual Arts in New York City. Her first book, Violette’s Embrace, was published by Riverhead Books. That book is a fictional biography of the French writer Violette Leduc. Her second book, the acclaimed Einstein’s Daughter: The Search for Lieserl (Penguin Putnam, 1999), is a non-fiction account of the mystery of the lost illegitimate daughter of Mileva and Albert Einstein. Broken Colors (Europa Editions, 2007) is the story of an artist, whose life takes her to a place where life and art intersect. Her fourth novel, Last Train to Paris, will be published in January 2014. Zackheim lives in New York City.
Find out more about Michele at her website and connect with her on Facebook.
Opinion:

Historically speaking its an important fiction book because its not often that one sees or reads about an author that dares to tackle events prior to World War II, or else mentions the little known tidbits that the public doesn't know about such as forced sterilizations for children of mixed marriages, or how it all seemed to be an endless mess, and how some people did their best to hide their origins from others, which I understand why they did, but I still found it somewhat offensive. Unfortunately for me, the book was a bit messy because all too frequently the narrative was interrupted by older Rose who adds some commentary, then there seemed to be multiple plots that went on that I was confused about their significance to the story and I couldn't really decide what year she was in. I think the book needs to be read in a few settings as possible, or else needs to be read more than once to be understood in what's going on.