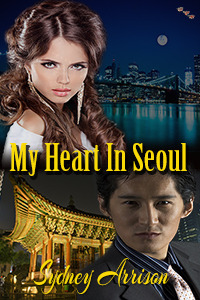 Name of Book: My Heart in Seoul

Jasmine Sinclair is a successful New York reporter. She’s used to reporting the news, not making the news. After she finds herself in the middle of a major scandal; and relentlessly pursued by the press, she flees the country with her father, United States Senator John Avery Sinclair.

Intoxicated by the night life in Seoul, Jasmine dares to approach a mysterious and handsome stranger. The encounter leads to an unforgettable, passion filled weekend, but upon returning to New York Jasmine soon realizes; that nothing will quell her yearning to be with the man she loves. Will distance, ambitions and family-ties keep them apart or will they find each other again?

The characters are more of told than show. Jasmine is best described as very frank and stubborn. Unfortunately I can't think of any other adjectives to describe her, while Wen seemed very unrealistic for a Korean man. I can't recall if he spent time away from Korea or not growing up, but in case if he did, then the story might have been slightly more realistic, although I would have expected his uncle to teach him respect and proper etiquette when dealing with Koreans.

You never know who your true love can be

Its written in third person narrative from Jasmine's and Wen's points of views. While the characters had potential to be interesting, unfortunately the story backgrounds really lacked for them, and I couldn't really understand their purpose. There seemed something false and unrealistic when it came to Jasmine's relationships with her girlfriends and family members, her father in particular. I couldn't sense tension and chemistry between the main leads, I couldn't sense them falling in love and so forth. While the meeting might have been slightly changed, but what would have been interesting is they could realistically overcome that first meeting and then became lovers instead of the way it was done. Also research would also have been nice, or at least real attempts at research when it comes towards Korean culture.

I do so dislike giving low ratings to a book, especially when an author gifted it to me, but sometimes one has to be the bad guy and has to tell what works and doesn't work. I have some experience when it comes to Korean culture, as well as know some history, and in many ways this book isn't very accurate in portrayal of the things I am familiar with. Where to start I wonder? Although things are changing in South Korea and they're becoming more Americanized one can say, there is still sort of shyness and embarrassment when it comes to public display of affection. Also, Korean men don't use the word "love" easily, and they rarely say it. They are demonstrative at showing it to a girl, but its a word that's not said. And love in Korean is "Sarang", not "Salang". There is really lack of chemistry between the two main characters, and I doubt that the name "Wen" is Korean. It sounds more Chinese than Korean. Korean names are something like Jung-Su, or Chae-Rin (girl), or Ji-Hoon or Rae-Won. Unfortunately even small things as well as manners are suspect for me: although I hadn't experienced the stares if I was with an Asian man, many other Western women often got odd looks if they were with Asian men, yet in Korea they seem to applaud the pairing instead of asking why he's not with a Korean woman. And I doubt that in Korea you'd shake hands with someone who's older than you, especially if its Korean male to another Korean male. Wouldn't you bow to someone who's older and use respectful language? Also, the whole mixed children in orphanages might have been possible in 1950s or 1960s, and I did ask a Korean friend of mine, but in modern times it doesn't happen, although there is stigma towards single mothers who haven't been married before. But still, if you check out some current Korean dramas, you'll see women who are single mothers, and a few haven't been married before. Besides these details, overall the chemistry and them falling in love wasn't realistic at all for me. Honestly, if a stranger came up and kissed a guy  then wondered whether or not she's a lesbian for wanting to sleep with him, would you still want to be with her?

Quick notes: I would like to thank the author for the opportunity to read and review the book. What's written above are MY experiences  and observations with Korean culture. This is not meant to be racist or anything.

2 out of 5
(0: Stay away unless a masochist 1: Good for insomnia 2: Horrible but readable; 3: Readable and quickly forgettable, 4: Good, enjoyable 5: Buy it, keep it and never let it go.)
2 Stars 2013 Asia/Asian America experience asian male/white female Book Review digital reading given by author goodreads Korea