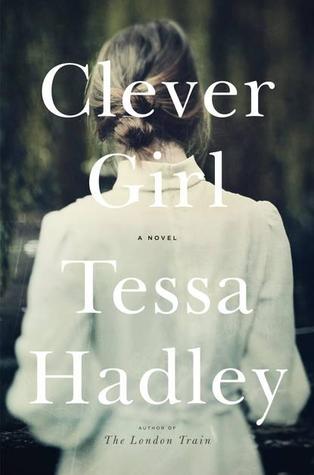 All the qualities that readers praised in The London Train are present in Clever Girl, Tessa Hadley's brilliant new novel. It follows the story of Stella, from her childhood as the daughter of a single mother in a Bristol bedsit in the 1960s into the mysterious shallows of her middle age. The story is full of drama - violent deaths, an abrupt end to Stella's schooldays, two sons by different fathers who aren't around to see the boys grow up - but as ever it is her observation of ordinary lives, of the way men and women think and feel and relate to one another, that dazzles. Yes, you think. This is how it is.

The main character would be Stella who happens to live with her single mother and grandmother. She is supposed to be intelligent, (I really couldn't see her that way, sorry), has two sons and is very promiscuous. She is also very thorny and doesn't seem to let anyone in easily. I also find her manipulative and unlikeable. She isn't religious and there seems to be sort of a parallel between pre-christian cultures and her and her friend worshiping the tree. There are other characters but they are merely there instead of making a mark on Stella, which is what the author was trying to do. There is Stella's mother who can't get along with her own mother and who is shameful of her own life, especially when it pertains to the mystery of Stella's father. There is Stella's soul-mate by the name of Valentine who is experimenting with his own sexuality and so forth. Some aspects of her life were interesting, but not much detail is given unfortunately.

Life changes gradually instead of dramatically

Its written in first person narrative from Stella's point of view. A small warning, but the conversation will be something like this instead of the use of quotation marks which puts my mind back to reading in Russian:

-I wanted to come here, she said to my mother, with no hint of worry that she might be an imposition. (Page 8)

This is how it should look for Americans:

"I wanted to come here," she said to my mother, with no hint of worry that she might be an imposition. (page 8)

Besides that, the episodes lacked bridges to get Stella to grow, and certain important events were glossed over. I also wished that Stella's sons would have played a larger role in the book instead of being there just to be there. I also felt that the atmosphere felt appropriate for the time period.

Tessa Hadley is the author of four highly praised novels: Accidents in the Home, which was long-listed for the Guardian First Book Award; Everything Will Be All Right; The Master Bedroom; and The London Train, which was a New York Times Notable Book. She is also the author of two short-story collections, Sunstroke and Married Love, both of which were New York Times Notable Books as well. Her stories appear regularly in the New Yorker. She lives in London.

I actually found it a bit of a frustrating read, and I oh so did want to like it. What I found the most frustrating is Stella, and personally the book should have been longer because I feel that she doesn't fill in certain holes when it comes to some plots. The reading really reminded me of reading Our Love Could Light the World despite it being a novel. But unlike Our Love Could Light the World which had believable changes and I could see the changes characters undergo through, Tessa Hadley just takes episodes but seems to lack material for building bridges. I honestly didn't understand how Stella is considered a "clever" girl, and I couldn't understand why she turned out the way she did. She strikes me as angry, bitter and spiteful. The first few episodes I liked, especially the button ones, and I liked the first episode as well which was reminiscent of my own childhood somewhat. (My grandmother used to have a collections of fascinating buttons that I loved staring at.) But with later episodes, for the most part I couldn't really identify with them. Like Stella I read a lot, but I doubt I have Stella's attitude.