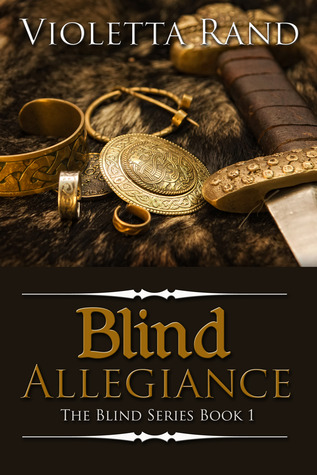 Part of a Series: Blind series

She’ll always fight for what she believes in…

Betrayed by a brother she hardly trusted before the bloodthirsty Viking, Jarl Randvior Sigurdsson, attacks her home, Noelle Sinclair is conveniently bartered as a means to save her cowardly sibling’s skin. Forced to leave her homeland and accompany the petulant Viking to the untamed wilderness of central Norway, Noelle is ever-aware of the burgeoning dangers around her—including her weakening resolve to resist Randvior.

Should Noelle surrender to his resplendent charms and seduction, or fight with every ounce of strength she possesses to get home?

Noelle is very unconventional and I don't mean it in a good way. She seemed to act like way too much someone from 21st century rather than someone from 11th century. Women usually worked from behind the scenes rather than made themselves be in front of the fire, and for a landed gentry, I think, a protocol has to be followed when it comes to public appearances, or isn't Noelle aware of that? I also was a bit fed up with characters constantly commenting on Noelle being a spitfire and Jarl constantly wanting to, well, ravish or spank her. While I kind of did admire that Jarl was respectful towards women and was different than stereotypes, I honestly had a hard time understanding why he liked Noelle so much. Other characters tended to be very one-sided and somewhat predictable in my view.

I have no idea what it should have been

Its written in third person narrative from Noelle's and Jarl's points of views. In a way I did like the way it started, although I felt that Noelle was very unconventional for someone who comes from 11th century and not in a good way. In college my major was history, and while I studied history, I also read a ton of fiction before and after I began my major. I recall reading that women should have been familiar with running households because the men were away and women needed to know what to do in any situations. I also thought that the book should have been historical fiction, and by that I mean being accurate in history and what was going on, instead of me wanting to shout at my Sony Reader that this isn't right to the best of my knowledge. I also felt that romance didn't feel really genuine and the characters didn't act like someone from 11th century would when it comes to intimacy.

When I choose this book, I was a bit excited about getting it because I enjoy reading medieval or pre-medieval way of life, and I was curious about the life that would go into it. For a history major, this was a frustrating read because I felt there were tons, and I do means TONS of inaccuracies that I spotted in this short novella. If you are looking for something accurate when it comes to history, please skip the book. If you are looking for something of a fantasy that focuses on romance, then I'm sure this will be more enjoyable. The inaccuracies I spotted there could really fill up a book or two, but to be brief, I doubt that in 11th century the surnames were well used, especially in a year like 1011. Also as well, bathing was looked down on in medieval ages and the clothing was very conservative instead of being sexy and it wasn't very colorful either because during that time people were trying to survive or to have order in their lives to focus on beauty. And colorful and expensive materials came from the East not the West. The Silk Road has long collapsed by 11th century, and only after Crusades which happened closer to 12th century did color permeate England as well as other territories. The romance side was a bit enjoyable, although I do admit that inaccuracies really pulled me out of focusing on it. The book is more of a fun romp through a "what-if" alternative world, and I do wish I was warned about that.

This is for Reading Addiction Virtual Tours