Name of Book: Puritan Witch: The Redemption of Rebeckah Emes

On a cold night in 1692, two young girls are caught up in the divining games of a slave woman—and then begin to act very strangely when the game goes wrong. Suddenly, Salem Village is turned upside down as everyone fears that witches may be involved.

Six months later, as news of the girls’ strange behavior becomes known, fear and suspicion overwhelm a nearby farming community, pitting neighbors against neighbors and turning friends into enemies. When Rebecca Eames makes one careless utterance during a verbal attack on her family, she is falsely accused of witchcraft.

After her fate is decided by three magistrates, Rebecca must endure a prison sentence during which she and her fellow captives have no choice but to valiantly struggle to find humanity and camaraderie among dire conditions.

In this novel based on a true story, a woman wrongly imprisoned during the seventeenth-century witchcraft trials comes full circle where she must determine if she can somehow resume her life, despite all she has endured.

For me personally the characters seemed a bit stereotypical, which isn't good or bad, but that I had a hard time catching their personalities and how they are like.The main character is Rebecca Eames who is in her fifties and has been accused and tried as a witch. She also has a terrible secret. Personality wise, she is best described as kind, gentle and very sweet, especially towards Dorcas Good. Other characters included Rebecca's husband who is best described as forgiving, then Rebecca's sons and their wives. I recall that one of the sons was extremely restless and didn't want to be a farmer while another was kind of opposite of the restless son. There were daughters too, but as I mentioned, a list of the characters would have been helpful.

Be careful of what is spoken

The story itself is written in third person narrative from Rebecca and those of her family members points of view. Although I liked learning the information, I feel that the characters should have been more in-depth. (I do admit that I have some difficulty in recalling some of the characters and their function.) The contrast between Rebecca in jail and that of her family outside the jail was actually interesting, as well as learning how various "witch" tests were conducted and the ghastly conditions of the prisoners. I also think that a character sheet is needed because I did get lost with some of the characters. 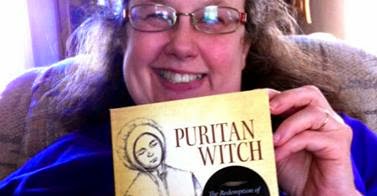 Peni Jo Renner is the direct descendant of Rebecca Blake Eames, one of over 150 innocent people accused of witchcraft during the infamous Salem witch trials of 1692. Rebecca Eames is her ninth great-grandmother.

Few things I've always been fascinated about when it came to history was Titanic and Salem Witch Trials. I was curious about it and wanted to learn more about Salem Witch Trials, which is why I've chosen this book. Although the book is well written and interesting, I do feel that when it came to detail and characters there should have been more worked in. For those interested in Salem Witch Trials but without going into great amount of details, then this is a perfect to get and read. Some things did shock me, such as the jail conditions, and that one had to pay for the shackles used on family members. I was also shocked by the repressiveness experienced by the Puritan community, that little things can add up to trouble.

This is for Historical Fiction Virtual Book Tour

4 out of 5
(0: Stay away unless a masochist 1: Good for insomnia 2: Horrible but readable; 3: Readable and quickly forgettable, 4: Good, enjoyable 5: Buy it, keep it and never let it go.)
2014 4 stars Book Review book tour goodreads No longer owned Paper Form Peni Jo Renner