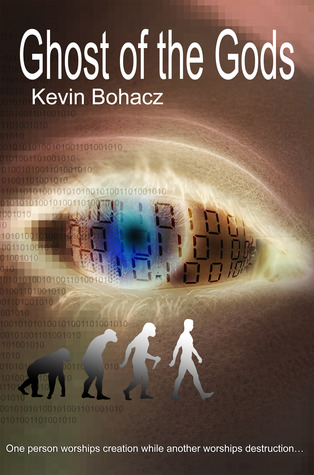 Name of Book: Ghost of Gods

Part of a Series: Immortality is the prequel

Publisher's Weekly STARRED review: In this sequel to Bohacz's Immortality, two years after the devastation of mass human extinctions in kill zones, mankind is still grasping for survival. An oppressive union of government and big business controls an exhausted America, which is divided between walled-in Protectorates and the unpoliced Outlands. Against this chaotic backdrop, paleobiologist and genetic researcher Mark Freedman and policewoman Sarah Mayfair continue their evolution into transhumans--nanotech hybrids with a connection to the god machine, the artificial intelligence that caused the recent massacres, in an effort to derail the destruction of the Earth's biosphere. Bohacz provides mind-bending portrayals of factions vying for power and reflections on the essence and fragility of humanity. But philosophical concerns never obtrude on the fast-paced plot, as authorities investigate communes of hybrids, and Freedman and Mayfair must choose between absorption into a collective mind or fidelity to their remaining humanity. The question of who can be trusted impels the reader to keep turning the pages of this highly satisfying and dynamic techno-thriller.

Some characters have changed a great deal, and most I didn't recognize. I was disappointed that one of the characters barely had any screen-time, and when he did, I didn't even recognize him. In the first book he was built up a great deal, yet his role was reduced to almost, well, nothing. Sarah still remains her fierce self, but still, I found something off about her, maybe the fact that romance seemed a bit one-dimensional for me. For some odd reason, I couldn't really connect to Mark, sorry to say. Unfortunately, few of the likable characters played an extremely small role in the book, at least the ones I liked from previous book.

I'm not certain what I should have learned from the story itself, but sometimes disappointments are inevitable.

The book is written in third person narrative mostly from Sarah's and Mark's points of views, and this time the author does mention whom is speaking. I couldn't really recognize the characters and I might have started reading Ghost of Gods immediately after finishing Immortality. There is also something minor: in the first book, Sarah and Mark can no longer eat meat, yet in this book they go to Burger King. I also felt that certain things happened a little too quickly for my liking, at least romantically wise, and I really would have liked to know the purpose of what they were doing in beginning because I really began to feel confused towards the middle and end. 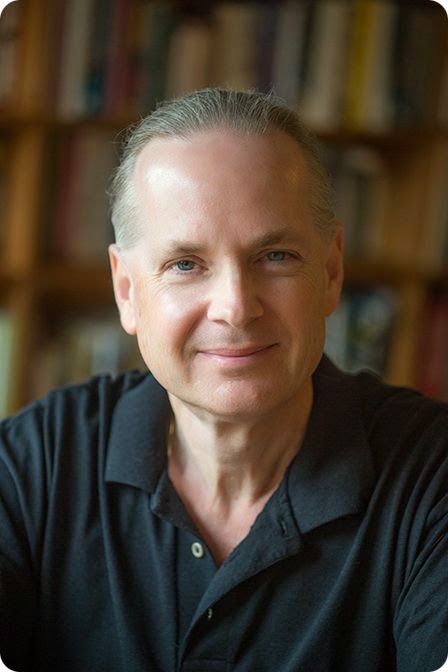 I am Kevin Bohacz the bestselling novelist of Immortality and a lucid dreamer… Welcome to my dreams. I am also a writer for national computer magazines, founder and president of two high technology corporations, a scientist and engineer for over 35 years, and the inventor of an advanced electric car system – the ESE Engine System (circa 1978). I was also a short order cook for I-Hop, flipped burgers at McDonalds, and delivered Chicken Delight. All of those careers and more are behind me now that I am a full time storyteller, a catcher of dreams. Thank you for reading my stories and making this all possible.
His latest books are Immortality and Ghost of the Gods.

Previously I've read the author's prequel to Ghost of Gods titled Immortality, and wow, that book blew me away and I never imagined giving four stars to a science fiction book. When I began to read this book, my expectations were high and I also was expected to be blown away. However, I ended up being very disappointed in the story, the characters and so forth. If you read Immortality and don't want to tarnish your memories of the strong and resilient Sarah as well as Kathy, and you want to remember the brave and purposeful Artie/Alex as well as the determined Mark and General McKafferty, then proceed with caution. But if you want to know how the story continues and can't help yourself, then the only thing I will mention is that you were warned. Also as well, for some odd reason this book and the previous really reminded me of Matrix series: Immortality was the first movie, while Ghost of Gods were the second and third movies.

This is for Pump Up Your Books Book Tour


Ghost of the Gods Tour Page

2 out of 5
(0: Stay away unless a masochist 1: Good for insomnia 2: Horrible but readable; 3: Readable and quickly forgettable, 4: Good, enjoyable 5: Buy it, keep it and never let it go.)
2 Stars 2014 Book Review book tour digital reading goodreads Kevin Bohacz