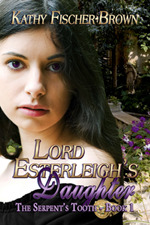 Part of a Series: The Serpent's Tooth

As a child, Anne Fairfield dreams of the father she never knew, the hero who died fighting the French and their Indian allies in a land across the sea. Her mother’s stories, and fantasies of her own devising, sustain and nurture her through a poor and lonely existence. Until one winter night, a strange man comes to call, and the life she has known comes crashing down like shattered glass.

Forced to confront sordid truths, secrets and lies, the headstrong young woman begins to learn that, like generations of Darvey women ruled by their hearts, she is destined to follow in their footsteps.

Set against the backdrop of 18th century England, Lord Esterleigh’s Daughter is the first book in “The Serpent’s Tooth” trilogy, which follows Anne from the rural countryside, to London society and into the center of the American Revolution.

Most of the characters, although interesting, either stayed the same or some I was confused about: Anne was made fun of because she was considered fatherless thus she develops a very tough shell. Unfortunately when she learns more about her family, it seems to send her spinning towards the ground where she makes very bad mistakes about what seems to be everything. There are also Anne's parents, her mother who remained loyal and steadfast to the absent father and the father who has his own secrets and reasons for why he did what he did. I forget the sweetheart's name, but he is sweet and loyal. There is also the half brother and stepsister who have a messed up mother and so forth.

I think mainly Anne tries to let go of the promise she was forced to make to her mother as well as reconcile what she has been lied to about.

The story is written in third person narrative from Anne's, her father's as well as the sweetheart's. I admit that the beginning and ending were a bit more powerful than the middle, at least towards the end my attention was grabbed and refused to let go of.


As a child Kathy wanted to be a writer when she grew up. She also wanted to act. After receiving an MFA in Acting and playing the part of starving young artist in New York, she taught theater classes at a small college in the Mid-West before returning home to the East Coast, where over the years, she and her husband raised two kids and an assortment of dogs. During stints in advertising, children’s media publishing, and education reform in the former Soviet Unions, she wrote whenever she could. Her love of early American history has its roots in family vacations up and down the East Coast visiting old forts and battlefields and places such as Williamsburg, Mystic Sea Port, and Sturbridge Village. At the same time, she daydreamed in history classes, imagining the everyday people behind all the dates and conflicts and how they lived.Claiming her best ideas are born of dreams, Kathy has written a number of stories over the years. Her first published novel, Winter Fire, a 1998 Golden Heart finalist in historical romance, was reissued in 2010 by Books We Love, Ltd.When not writing, she enjoys reading, cooking, photography, playing “ball” with the dogs, and rooting on her favorite sports teams.

When I read this book, I couldn't help but have a great deal of frustration towards it. I really liked the beginning of the story where Anne learns about a father that she's denied for almost her entire life, but afterwards, I was thrown into a cycle of frustration. I honestly couldn't understand the family relationships between Anne's parents. What I mean is that the mother has an interesting background, but I didn't get how it related to the father which made it more difficult for me to relate to Anne's actions as well as to Anne herself. Also for a while I thought it a bit similar to The Frost of Springtime by Rachel Demeter.

3 out of 5
(0: Stay away unless a masochist 1: Good for insomnia 2: Horrible but readable; 3: Readable and quickly forgettable, 4: Good, enjoyable 5: Buy it, keep it and never let it go.)
2012 3 Stars Book Review digital reading goodreads Kathy Fischer-Brown