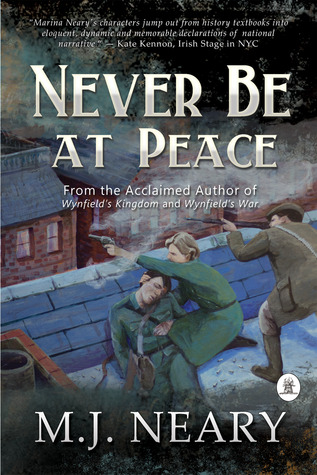 Name of Book: Never Be at Peace

A pugnacious orphan from a bleak Dublin suburb, Helena Molony dreams of liberating Ireland. Her fantasies take shape when the indomitable Maud Gonne informally adopts her and sets her on a path to theatrical stardom - and political martyrdom. Swept up in the Gaelic Revival, Helena succumbs to the romantic advances of Bulmer Hobson, an egotistical Fenian leader with a talent for turning friends into enemies. After their affair ends in a bitter ideological rift, she turns to Sean Connolly, a married fellow-actor from the Abbey Theatre, a man idolised in the nationalist circles. As Ireland prepares to strike against the British rule on Easter Monday, Helena and her comrades find themselves caught in a whirlwind of deceit, violence, broken alliances and questionable sacrifices. In the words of Patrick Pearse, “Ireland unfree shall never be at peace”. For the survivors of the Rising, the battle will continue for decades after the last shot had been fired.

I had a hard time keeping track of some characters, although the author has done a good job of making them memorable. The only two characters that I fully remember are Helena and Bulmer. Helena is definitely a firecracker and either you'll love or hate her. She's cynical, tends to take advantage of people, is a revolutionary, intelligent, but she does get trapped easily and I think at times she wants to follow conventions instead of standing out all the time. She also becomes conservative as she ages and seems to ride out more on the past than the future. Other character includes Bulmer who had a liberal upbringing, has a lifelong crush on Helena and likes ideas but never likes to grow them. I also might describe him as a bit weak and he is afraid of grabbing his own happiness.

The impossible can be possible

The story is written in third person narrative from Helena's, Bulmer's and other characters' points of view. A lot of times I had trouble remembering who's who and their function or relation to Helena, but still the protagonists are very memorable for me. There are also time jumps a lot of times which can be enjoyable or jarring, at least it depends on how well you know the geography/history of the area. I think the time the author shone is when she was creating multi-generational conflict between Helena and a bastard child. I also liked learning bits and pieces of Irish culture and their thoughts and ideas.

The only thing I knew when it came to Ireland and England is that the two nations despise each other, and with that I have vague reasons or grasp as to why. I think its because I was going into the unfamiliar territory that I found myself unable to enjoy as it should be. From what I can tell, the author is very talented in drawing up memorable characters, although a lot of times I was confused by their feelings and motivations; but still if only for a memorable female protagonist, Helena Molony, I would recommend the book to be read. Also, in some cases the time jumps don't really help for those that lack familiarity with the geography or history of the time period. Still the characters are both complex and human and are also multi-dimensional.

This was given to me by author

3 out of 5
(0: Stay away unless a masochist 1: Good for insomnia 2: Horrible but readable; 3: Readable and quickly forgettable, 4: Good, enjoyable 5: Buy it, keep it and never let it go.)
2014 3 Stars Book Review digital reading given by author goodreads Marina Neary