G341 Book Review of Murder by Misrule by Anna Castle 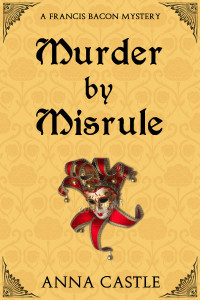 Name of Book: Murder of Misrule

Francis Bacon is charged with investigating the murder of a fellow barrister at Gray's Inn. He recruits his unwanted protégé Thomas Clarady to do the tiresome legwork. The son of a privateer, Clarady will do anything to climb the Elizabethan social ladder. Bacon's powerful uncle Lord Burghley suspects Catholic conspirators of the crime, but other motives quickly emerge. Rival barristers contend for the murdered man's legal honors and wealthy clients. Highly-placed courtiers are implicated as the investigation reaches from Whitehall to the London streets. Bacon does the thinking; Clarady does the fencing. Everyone has something up his pinked and padded sleeve. Even the brilliant Francis Bacon is at a loss — and in danger — until he sees through the disguises of the season of Misrule.

The characters are well rounded as well as very memorable, at least in my experience. Frances Bacon is based on someone real and he cares more for reading than anything else (I'm positive that readers can really relate to this desire.) He is also intelligent, and a little arrogant in my view and seems to be in denial about something when it comes to himself. Tom Clarady and his group of friends which include Ben, Allan who is known as Trumpet and Stephen, are also memorable. Tom is very observant and isn't good at coming up with rhymes, and he is also "new money" if I'm not mistaken. Allan is very headstrong, mischievous, protective and one can't help but notice him. Yeah, he was my favorite character. Stephen is snooty, spoiled and weak-willed. He and Tom used to be best friends, but due to circumstances that kind of fell away. While Ben did play a part, I don't think he was as noticeable as other characters. And yeah, there are a few strong women characters such as Tom's crush named Clara as well as one of the man's mistresses. There is another woman who is very modern, but that one one has to discover for themselves.

Its impossible to know everything, sometimes you need a new perspective

The book is written in third person narrative from Tom's and Frances's points of view. The story tended to be a bit slow and didn't really rush, helping the reader experience the England of late 1500s. The mystery itself was intriguing and really kept the reader going through twists and turns and yet in some cases it really surprised the reader. What I also liked is that the characters were human, and yes, sometimes first impressions and ideas are incorrect, yet its vital not to give up. Anna Castle has been a waitress, software engineer, documentary linguist, college professor, and digital archivist. Historical fiction combines her lifelong love of stories and learning. She physically resides in Austin, Texas, and mentally counts herself a queen of infinite space.
For more information please visit Anna Castle’s website and blog. You can also follow her on Facebook and Twitter.
Opinion:

A very well written mystery set in Elizabethan England, in 1587 to be exact. Besides Shakespeare and Queen Elizabeth I, I don't really know much about England during that time, but it was pretty cool to discover interesting facts through the book. I wish I could have gotten the version where the author's note was written so I could know what was fact and fiction in the book. I also thought there was a bit something modern in the story, despite it being set over 400 years ago, perhaps the dialogue or that ambition and greed never really got old. Some of the characters and families had a bit of a modern feel to them, and one could easily contrast them to the past. I also appreciated interesting curses that some of the characters used.

This is for Historical Fiction Virtual Book Tour

4 out of 5
(0: Stay away unless a masochist 1: Good for insomnia 2: Horrible but readable; 3: Readable and quickly forgettable, 4: Good, enjoyable 5: Buy it, keep it and never let it go.)
2014 4 stars Anna Castle Book Review book tour goodreads No longer owned Paper Form