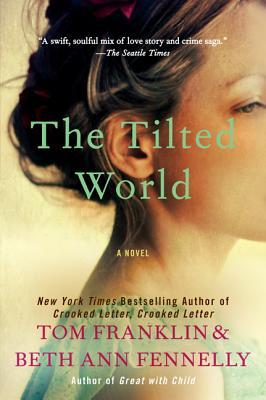 Name of Book: The Tilted World

Set against the backdrop of the historic 1927 Mississippi Flood, a story of murder and moonshine, sandbagging and saboteurs, dynamite and deluge-and a man and a woman who find unexpected love-from Tom Franklin, author of the bestselling Crooked Letter, Crooked Letter, and his wife, Pushcart Prize-winning poet Beth Ann Fennelly

The year is 1927. As rains swell the Mississippi, the mighty river threatens to burst its banks and engulf all in its path, including federal revenue agent Ted Ingersoll and his partner, Ham Johnson. Arriving in the tiny hamlet of Hobnob, Mississippi, to investigate the disappearance of two fellow agents on the trail of a local bootlegger, they unexpectedly find an abandoned baby boy at a crime scene.

An orphan raised by nuns, Ingersoll is determined to find the infant a home, a search that leads him to Dixie Clay Holliver. A lonely woman married too young to a charming and sometimes violent philanderer, Dixie Clay has lost her only child to illness and is powerless to resist this second chance at motherhood. From the moment they meet, Ingersoll and Dixie Clay are drawn to each other. He has no idea that she's the best bootlegger in the county and may be connected to the missing agents. And while he seems kind and gentle, Dixie Clay knows he is the enemy and must not be trusted.

Then a deadly new peril arises, endangering them all. A saboteur, hired by rich New Orleans bankers eager to protect their city, is planning to dynamite the levee and flood Hobnob, where the river bends precariously. Now, with time running out, Ingersoll, Ham, and Dixie Clay must make desperate choices, choices that will radically transform their lives-if they survive.

Practically all the main characters were very well written as well as memorable for me: Dixie Clay who happens to be a bootlegger simply because she wants to fill in the gap to do something and who falls very hard for Willy the baby; Jesse who has two different colored eyes and who seems to enjoy control as well as getting money. He is also very ambitious. Then there's Ted Ingersoll, an orphan who also happens to be musically talented and seems to refuse to connect to others; there is also Ted's partner Ham who enjoys teasing people and is also very loyal to Ted. He often fabricates what his name means and where it came from; last but not least there is Jeannette, a flapper who desires a baby very badly and would do anything to get one.

Families come in all shapes and sizes

The book was written in third person narrative from Dixie Clay's and Ingersoll's points of view. For me personally the characters were the strongest part of the book and they were also very memorable. I do admit that the detours into the past happened a little too often although they were beneficial in building up the characters, but they did slow down the main story. I also appreciated how Dixie Clay fell for Willy and how attached she grew to him, as well as how Ingersoll took care of him in beginning. 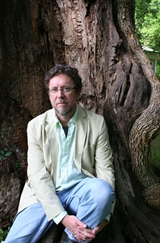 Tom Franklin is the award-winning and New York Timesbestselling author of Crooked Letter, Crooked Letter, which was nominated for nine awards and won the Los Angeles Times Book Prize and the prestigious Crime Writers’ Association’s Gold Dagger Award. His previous works include Poachers, whose title story won the Edgar Award, as well as Hell at the Breech and Smonk. The winner of a 2001 Guggenheim Fellowship, he teaches in the University of Mississippi’s MFA program.

Beth Ann Fennelly has won grants from the National Endowment for the Arts and United States Artists, as well as a Fulbright grant to travel to Brazil. Her honors include the Kenyon Review Prize and three inclusions in The Best American Poetry. She has published three volumes of poetry as well as a work of nonfiction, Great with Child. She directs the University of Mississippi’s MFA program, where she was named the 2011 Outstanding Teacher of the Year.
Opinion:

I found it to be a very engaging and well researched book. Prior to reading The Tilted World, I hadn't heard of the 1927 flood disaster. I really did sense the southern world of 1927 as well as how it differed from the northern world; the people there are small-town and I can sense that the things they enjoyed in the north are an enigma to the south. Something I found interesting are the irrational weather patterns that we are dealing in this life and that they were dealing in 1927; in 1927 it continuously rained in Mississippi basin while today the weather in Texas anyways is also unpredictable. I do wish that the romance between Dixie Clay and Ted Ingersoll would have been more drawn out instead of something that seemed a little too sudden for me. Since it was 1927, I guess I wanted to know the characters' future which wasn't given in the book.