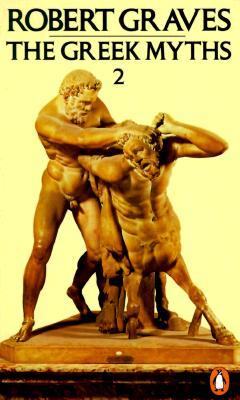 Name of Book: The Greek Myths 2

"My method has been to assemble in harmonious narrative all the scattered elements of each myth, supported by little-known variants which may help to determine the meaning, and to answer all questions that arise, as best I can, in anthropological or historical terms. " (Vol. I 22)

149. The Lemnian Women and King Cyzicus

Description of Heracles going to serve Jason as well as the farewell party. A year before the departure, Lemnian women murder all menfolk, with exception of Hypsipyle who saved her father, King Thoas, secretly. The ship sailed to Lemnia, and the women convinced the men to stay with them for a while, with Jason begetting Euneus and the twin Nebrophonus. Eventually Euneus supplied Greeks with wine during the Trojan War. Soon though, the men left the island and the women discovered that Hypsipyle betrayed her oath and sold her into slavery. In Arcton, they were welcomed by King Cyzicus who was the son of Aeneus, being Heracles's former ally who just married Cleite. They sailed off but due to weather had to come back and Cyzicus mistook them for pirates, thus he was killed and they had to find a way to placate the goddess Rhea.

Heracles challenged the Argonauts to see who could row the farthest, with Heracles ultimately winning the contest, and Jason passing out on the mouth of the river Chius. The Argo becomes beached. Heracles's squire, Hylas, set out and mysteriously disappeared and wasn't found successfully. Its thought that Dryope and the sister-nymphs of Pegae enticed Hylas to live with them. Since neither Heracles nor Polyphemus appeared, Jason sailed off without them, which later on let Heracles get his revenge on Calais and Zetes. Fate of Heracles and Polyphemus is told, that Heracles resumed his labors, and Polyphemus became king of hte city of Crius until he was killed by Chalybians. Different version is told. At the island of Bebrycos King Amycus and Polydeuces began to fight, with Polydeuces winning the challenge and killing the king. After placating King Amycus's father, Poseidon, they sailed on to Salmydessus in Eastern Thrace where they met Phineus who is the son of Agenor. Harpies plagued him due to prophesying and stole off the victims. Somehow Jason defeats the haripies, and Phineus gave him instructions on navigating Bosphorus as well as accounts of climate and culture he should expect.

151. From the Symplegades to Colchis

The Argonauts managed to navigate through the terrifying rocks, and came to islet of Thynias where they sacrificed a goat to Apollo and made an oath to never desert one another in difficult times. King Lycus offered up his son to be navigator for the Argonauts, but the boy died along the way, thus his replacement was Ancaeus. In Sinope, Jason found three men to fill benches and a brief origin of Sinope is given. Descriptions of various places the Argonauts visited are given, until they meet with the birds at the islet of Ares and met with four Aeolians who were castaways. After the rescue they sailed on to island of Philyra and soon the Caucasus range.

152. The Seizure of the Fleece

Here and Athene were debating how Jason will win the golden fleece, thus they brought Aphrodite in who asked that her son Eros make Medea fall in love with him, which he does for a plaything of Zeus's. Jason and his companions agreed to go to King Aeetes, who is the father of Medea as well as her half brother Aspyrtus. The welcome was not pleasant by King Aeetes, but due to the rescue of four Aeolians Jason agreed to undertake an impossible challenge, helped along by Medea whom Eros already pierced her heart. Eventually they get the fleece, despite King Aeetes's protests and Jason will attempt to conquer Sauromantians, descendants of Amazons. A brief history of Sauromantians is given.

153. The Murder of Apsyrtus

There are many different accounts of Argo returning to Thessaly, and few accounts involve Medea killing her half-brother. General agreement is that she was at a temple but begged her brother to rescue her, pretending to be abducted, thus he did so and got killed. More accounts of how the Argo has sailed are given and what happened afterwards.

154. The Argo returns to Greece

Upon their arrival to Corcyra, there was an appeal to King Alcinous and Queen Arete demanding Medea and the fleece, however Queen Arete told King Alcinous of horror stories of the way fathers treat their daughters. Fearing to lose Medea because she is a virgin, Jason ends up marrying her and taking her back home. More adventures are told, including that of Jason meeting the Sirens. They were also stranded near Lake Tritonis but thanks to Triton they made it to Mediterranean Sea. More adventures are chronicled such as Medea killing Talos who was created by Hephaestus as well as more travels and some more adventures or their variants.

They came back to beach of Pagasae, but there is a rumor that Pelias had killed Jason's parents, Aeson and Polymele as well as the infant son named Promachus. There is a consensus of war between the comrades, although Acastus opposed it due to the fact that Pelias is his father. Medea reduced the city though, murdered Pelias and manipulated his daughters Evadne and Amphinome to cut him up. Jason ends up being in exile. A different version of Aeson's death is given and then an epilogue of what happens to the daughters.

Jason hung up the golden fleece at a temple as well as dedicated Argo to Poseidon. Aeetes's children were dead, and Jason begins to suspect that Medea might have done the deed, thus after ten years of rule, he wants to divorce her. Jason also begot seven sons and seven daughters on Glauce, and there was an attempted murder by Medea on Glauce. Zeus fell in love with Medea, but she repulsed his advances, and Hera agreed to make her children immortal if she will sacrifice them at an altar, which she did do. Souls were immortal, while a lot of them died, mention of the kids's fate as well as what happened afterwards.

Medea marries and travels through various kingdoms, while Jason becomes exiled and is killed by a prow of Argo. More stories and legends about Medea are given, followed by more stories about the crew of Argo and what had happened to them afterwards.

158. The Foundation of Troy

There are some legends about how Troy was founded, one was of Prince Scamander leading people to find a colony and eventually Prince Scamander's son, Teucer succeeded him. Another legend is that of Athenians who say that Teucer isn't from Crete but belongs to the deme of Troes and came from Athens to Phrygia where he was welcomed and so forth. There is also a story of Dardanus founding a city on a small hill which became Troy. More legends and stories follow as well as that of the Palladium and how anger of the gods enveloped the city and more is told about Priam and his wives and children.

Story of Helen, Leda's and Zeus's daughter is told, as well as how she came to marry Menelaus, and how Odysseus came up with the plan of defending Helen and whoever should be her chosen husband and of how Aphrodite vowed to make Tyndareus's three daughters notorious for adulteries. There is also curse on Paris before his birth and of his deeds and his lover before Helen. There is also great amount of detail of the beauty contest, including a nude scene and of Paris regaining his heritage and of him being cunning and eloping with Helen. A different account is then given.