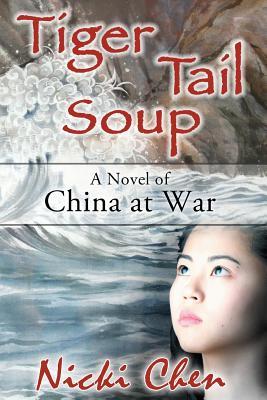 When the first bombs fall, An Lee is pregnant and her husband is missing. He won't be home to stay for another seven years. It's up to An Lee to protect her mother, mother-in-law, young daughter, and soon-to-be-born son. Surrounded by the Japanese military, An Lee struggles to survive, enduring hunger, loneliness, and fear. Then, on December 7, 1941, the enemy invades and occupies their little island on the coast of China, and An Lee's strength is put to the test.
In this lyrical and emotionally charged novel, Nicki Chen paints a fascinating portrait of love and resilience in a time of war.

The main character would be An Lee. In childhood she is a bit tomboyish although she grows out of it, and she is best described as resourceful, talented, and she also wants to do more for China than just her assigned role dictates. She is also very intelligent and tends to beat herself up. I would guess she is the type that doesn't like when things are out of control although she does the best she can for those she can. Her husband Yu-Ming is barely seen throughout the book but he is sweet and dedicated to her, just like she to him. There is the mother-in-law as well who is judged against but she is still intelligent and a good mahjong player as well as An Lee's mother who has lotus feet and is practical and she favors the son, the Tiger child. The maids also play big roles in keeping the family alive, such as one who is resourceful and frequently goes out shopping to get whatever treats she can, as well as one that is dating the goat-herder.

Survival is a type of war; women can be warriors as well

The story is written in first person narrative completely from An Lee's point of view. I feel that the pacing was slightly uneven, especially towards the end. In beginning I find myself very immersed in her world as well as her experiences. The author is good at expanding the every-day of the occupied world that it seemed a shame that 1943?-1946 were glossed over briefly, although I sort of understand why it was done. Also in an odd way, there was a comparison there to Gone with the Wind (In Gone with the Wind the hot scene where Melanie gives birth to the child,) there is a similar tone of urgency in Tiger Tail Soup. Despite what might sound like a sad book, I actually didn't find it that way. Instead I found it informative and I could feel hope in there.

While there is some information on China when it comes to WWII, the information is best described as scanty and not a lot of people are familiar with the Asian side when it comes to WWII; (and those that are, only know about the atomic bombs on 1945) that WWII started in 1930s instead of 1940, and so forth. In her books, Amy Tan hints at WWII and the inaccuracies but she doesn't really go into great detail, and I have to admit that hers are very sketchy writings. This is an impressive story, although its not exactly finished (A sequel is in the works I hope,) of a Chinese woman living through Japanese Occupation while taking care of her mother and mother-in-law plus maids and children. The story deals with shortages, with wanting to do more for China than just sit in the sidelines, of sacrifices, as well as survival and attempts at fleeting happiness in the midst of sorrow. I really liked An Lee and was very impressed with her strength and forbearance  when it comes to life. The story itself focused more on survival and trying to get through WWII and besides her missing her husband there isn't any romance in the book, so if you are looking for something non-romantic, then give it a try.

Quick Notes: I would like to thank the author for the opportunity in reading and reviewing this book

4 out of 5
(0: Stay away unless a masochist 1: Good for insomnia 2: Horrible but readable; 3: Readable and quickly forgettable, 4: Good, enjoyable 5: Buy it, keep it and never let it go.)
4 stars Asia/Asian America experience Book Review China digital reading given by author goodreads Nicki Chen