A terrible loss. A desperate journey.
A mother seeks the truth.

In December of the year 1377, five children were burned to death in a suspicious house fire. A small band of villagers traveled 200 miles across England in midwinter to demand justice for their children’s deaths.

Sinful Folk is the story of this treacherous journey as seen by Mear, a former nun who has lived for a decade disguised as a mute man, raising her son quietly in this isolated village.

For years, she has concealed herself and all her secrets. But in this journey, she will find the strength to claim the promise of her past and find a new future. Mear begins her journey in terror and heartache, and ends in triumph and redemption.

Mear/Miriam is actually a woman living as a mute man in a village who has a ten year old son who died in the fire along with some other boys. She is resourceful, has a hidden past, loyal, intelligent, tough, strong and brave. During the journey with others, little by little of her past becomes revealed. I remember some of the characters, although not all. Benedict is a man married to a woman who descends from Jews and who is described as empty for something. Benedict tended to be cold-hearted and its at his house that the fire has begun. It is known that his wife had other lovers. Salvius has helped rescue Mear/Miriam and has given her and her son work and a home. He also has a nephew named Cole and he is described as able to pass for a noble and is admired by other characters. Many of the characters have their own secrets and possible reasons as to why the act was done.

Truth comes out, nothing is what it seems

The story is told in first person narrative from Mear/Miriam's point of view. The story has kept me reading in finding out what happened and why it happened. There is a mystery of what happened and why it happened, and certain elements weren't really clear for me. Also, since the book is from Medieval Ages, I will mention that there are parts that tend to be on the shocking/gruesome side. The book does have a little of everything such as mystery, strong female characters, sort of love story, justice, David vs Goliath scenario, and so forth. Since I haven't read Chaucer fully, and only have brief understanding of Thomas Aquinas as well as augustine, a lot of references flew over my head. 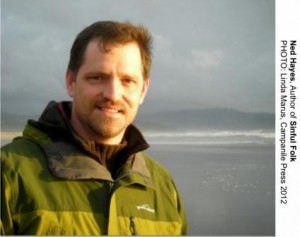 Ned Hayes first read Chaucer in graduate school, where he worked under noted medieval scholar Richard Emmerson. He has studied at Stanford University, Western Washington University, the Rainier Writing Workshop and the Graduate Theological Union at the University of California, Berkeley. He lives in Olympia, Washington, with his wife and two children. Sinful Folk is his first story set in the medieval era. He is now at work on a new novel set in the 1300s.
Find out more about Ned at his website, follow him on Twitter, and see what he’s pinning on Pinterest. You can also read more about the book at its website, follow news of the book on Facebook, get quotes from the book on Pinterest.
Opinion:

The book is beautifully written and the story is told magnificently, the mystery unraveled not all at once but little by little, and since protagonist doesn't speak, it becomes even more important to pay attention to what's going on. It's also a double mystery because one is finding out the truth of that night, as well as Mear's mysterious background. I do feel that the story did drag in some parts, and its pretty depressing to read how Jews were despised and hated for things not of their own doing. Towards the end I was able to put some stuff together. It's also interesting that the story deals with Edward the Black Prince, whom I've previously encountered in A Triple Knot, detailing Joan of Kent's life and in there he is portrayed as obsessive, cunning, dark, suspicious and so forth. I didn't appreciate the christian symbolism that a Jewish character undergoes through, and although I didn't agree with some of the Jewish character's actions or deeds, I understand why that character made those choices in the first place. I am also curious about the end, when Kaddish was being said, was it being said in a cemetery or among other Jews?