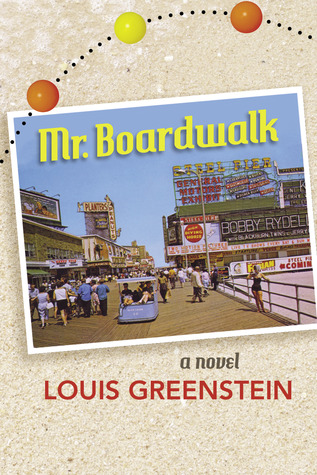 At the age of seven, Jason Benson first experiences the wonders of Atlantic City. Amazed and smitten, Jason decides his real life will happen here, in this magical shore town. Growing up in a Philadelphia suburb in the 1960s and 70s, he lives only for his summers on the boardwalk, where his father owns a pretzel stand. From a gypsy friend, the boy learns to juggle, and soon “Jason the Magnificent” entertains rapt beachside crowds with his skill and clever patter. He can’t wait to finish high school so he can move to Atlantic City permanently.

But his plans go awry. More than 20 years later, we meet him as a grumpy, distant New York copywriter who has never spoken of his youth. All his adventures on the boardwalk—and all the dreams he cherished there—remain a secret from his wife.

In deftly interwoven passages, Mr. Boardwalk traces the excitement and perils of the young Jason and the moral growth of the adult who must come to terms with the past he tried to forget. It is a dual coming-of-age story like no other—a tale of magic and reality intertwined.

The main characters include Jason Benson from the time he is seven years of age to the time he graduates from high school. In beginning he is best described as enchanted with Atlantic City, an optimist, talented and excitable. I got the feeling that as time wore on and the more talented he became in juggling, the more he tried to cling on to the innocence he had as a child, often wanting to go back to when times were simpler. He also dislikes school and often desires to live in Atlantic City for a full year instead of just seasonal. Skip is Jason's good friend, and Jason always tries to be there for him. I would guess they are more friends because they live close rather than because they have anything in common. Skip suffers from dyslexia and comes from an abusive family, although he always tags along with Jason. Skip doesn't like Atlantic City and is into drugs as a teenager. Sarah becomes Jason's high school girlfriend and tries her best to accommodate Jason's desires, often not giving voice to what she wants. Jason's father owns pretzel stores and is loyal to Atlantic City. He is a self-made man and doesn't have a close relationship to Jason. He tends to repeat mistakes that were done to him as a child.

History plays a bigger role than you think

The story is written in first person narrative from Jason's point of view and it tends to flip from 1960s-1970s to 1999, when he is relating the story to his wife and daughter. I wasn't confused when the narrative switches time and the story really managed to keep my attention on what was going on, thus I felt it didn't drag on at all. I was surprised that some attitudes from 1950s remained through 1960s however. If I might be honest, I did feel that religion was a but superfluous in the book, or short of Jason having a Bar Mitzvah, I'm not 100 percent certain what role it played in the story. Did Jason learn any lessons from being Jewish?

Louis Greenstein’s writing has crossed multiple genres, from scripts for the Emmy Award-winning Nickelodeon series Rugrats to stage plays performed by theaters around the country. Several of his plays are available in print and his work has been honored with a fellowship from the Pennsylvania Council on the Arts. His musical show, One Child Born: The Music of Laura Nyro, co-written with performer Kate Ferber, travels to multiple venues in New York City and elsewhere. Mr. Boardwalk is his first novel.

The best way to describe this book is to say that its a mixture of both nostalgia yet modernity. The book teases the senses and keeps the reader on a leash in trying to figure out why Jason Benson turned out that way. I admit that I grew up in 1990s, and in Texas, thus I'm not familiar with the time or situation, but reading the book, I felt a wave of nostalgia for a lost childhood of the time of Judy Blume, at least in my case. There is cleverness in the writing and I loved the sensory description. While there is nostalgia, there are also hints of psychology and of wondering why Jason is that way and what he might be thinking and feeling as years come and go.

Quick Notes: I would like to thank Doug Gordon from New Door Books in allowing me to get this wonderful novel

4 out of 5
(0: Stay away unless a masochist 1: Good for insomnia 2: Horrible but readable; 3: Readable and quickly forgettable, 4: Good, enjoyable 5: Buy it, keep it and never let it go.)
2014 4 stars Book Review goodreads Louis Greenstein Paper Form