G421. The Pillow Book of Sei Shonagon: The Diary of a Courtesan in Tenth Century Japan 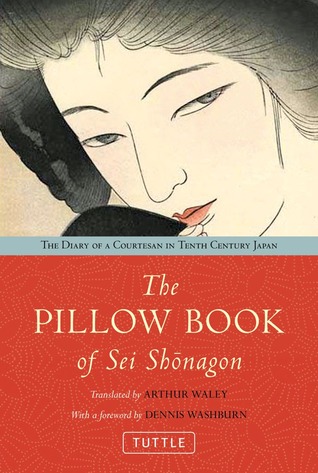 Title of the book:  The Pillow Book of Sei Shonagon: The Diary of a Courtesan in Tenth Century Japan

Japan in the 10th century stood physically and culturally isolated from the rest of the world. Inside this bubble, a subtle and beautiful world was in operation, and its inhabitants were tied to the moment, having no interest in the future and disdain for the past. In a small diary, a young courtesan of the Heian period gives her account of the Japanese courts of the day, providing perspective on a unique time in Japanese history. A contemporary of Murasaki Shikibu, the author of The Tale of Genji, Sei Sho-nagon's commentary brings an added dimension to that timeless and seminal work.

In a place and time where poetry was as important as knowledge and beauty was highly revered, Sei Shonagon's private writings give the reader a charming and intimate glimpse into a time of isolated innocence and pale beauty.

Historians go to primary sources in the search for evidence to answer questions about what happened in the past and why. When working with primary sources, answering a series of basic questions can help us draw more accurate conclusions.

When trying to gather evidence from a primary source, first try to answer these basic questions. (You may not have enough information to do so.)

This is a brief translation of diary of Sei Shonagon from Japan during Heian Era, the time when Tale of Genji was written by Murasaki Shikibu

Who wrote or made it?

When was it written or made?

The diary entries were composed in 11th century, although Arthur Waley shares some of the viginettes that Sei Shonagon wrote that took place in 980s at least, although most of them are focused in 990s.

Where was it written or made?

It was written in Kyoto, in Japan actually during the Heian Era.

How was it written or made?

Originally Sei Shonagon had intentions of writing it mainly to herself, or for herself rather, until a fateful when someone found her diary and decided to spread it around the Japanese Court, although Arthur Waley does suppose that later on she started to write as if her writing will be read by audience.

What evidence does this source contribute to my research?

I would assume that if I was doing research on life in Heian Era Japan, about how wealthy women saw life, this would be a good book comparison to Tale of Genji by Murasaki Shikibu. Fantasy life versus reality life in other words.

Then Ask, What Is The Meaning of This Primary Source?

In my opinion, this is a very personal diary of a Court handmaiden, perhaps the meaning could be how human it feels, despite the fact that Sei Shonagon, for me anyways, is a detestable woman and someone I can't really relate to. Literally, think of a 10th-11th century Japanese Scarlet O'Hara, sort of, and you have her.

Why was this document/object written or made?

From reading the Arthur Waley translation, the best guess I can make about why she wrote it is perhaps because it was a fashionable thing or do, or maybe there was someone she was competing with, or perhaps she was reminiscing about the good old days. The two possible guesses include because it was in vogue and she was reminiscing the good old days.

Who was the intended audience/user?

Originally, she claimed that she was the intended audience for her own diary, but after it was discovered and passed around, I think she began to write it as if it could be read by other members of the aristocracy.

What questions does this source raise? What don’t we know about this source?

The questions that are raised is whether or not all Japanese women at the time are like that as well as whether or not she has pity towards anyone. (I would guess she doesn't.) I also wonder how she was like before going to court to work for empress. What I don't know about the source is what happened to her afterwards and why she left court. To be honest, for me anyways, Sei Shonagon is a vain and boring woman.

What other information do we have about this document or object?

Contrary to the title, she is not a courtesan but she worked in a royal court. She entertained and helped the empress out. She had some affairs, seemed to care very little for things outside of fashion and also possessed very little care towards things outside of beauty. She is not the type to try to make a world a better place.

There's Tale of Genji by Murasaki Shikibu which describes an ideal sort of Court Life in Japan, and that's the only I read. There are also various diaries, including Murasaki Shikibu's diary that also describe and talk about court life during Heian Era in Japan.

What other sources might help answer our questions about this one?

Possibly other diaries written by women during the time that Sei Shonagon wrote her diary. Perhaps they might answer my questions whether all Japanese were the way Sei Shonagon was, as well as how other people saw her.

What else do we need to know in order to understand the evidence in this source?

What have others said about this or similar sources?

From what I read, Murasaki Shikibu isn't able to stand her and actually detested her. (Don't really blame her.) This is an incomplete diary as I mentioned before, which disappoints people.

How does this source help me to answer my research question?

If I was doing a research on women at Court during Heian Era in Japan, this would be a good contrast to Tale of Genji.

How does evidence from this source alter or fit into existing interpretations of the past?


While Sei Shonagon is a detestable woman, she has a talent for making things feel human and real somehow. Tale of Genji is of fantasy and is surreal, while the diary humanizes people.

I read bits and pieces of The Pillow Book under a different translation, that of Norton World Anthology Volume B, Ivan Morris I think, and I have to admit that even from these snippets I really couldn't stand Sei Shonagon. But yes, years pass and sometimes literary tastes do change, thus I thought to give Sei Shonagon one more chance, not to mention I thought to see how did Sei Shonagon inspire the character of Astrid's mother from White Oleander? Unfortunately, upon reading and getting the book, my opinion of Sei Shonagon didn't change. I still found her to be unforgiving, selfish, vain and boorish. Although I'm the type that thinks books and stories should be read in their entirety, I would personally say there are special cases where I would advocate for abridged versions, just to see how I like them, and this is the case where I will advocate for abridged version. If you find yourself loving Sei Shonagon and wanting to read her whole diary, then yes, get the whole diary. If not, think of this: you didn't spend three or more months trying to get through a book where you wanted to torture her.