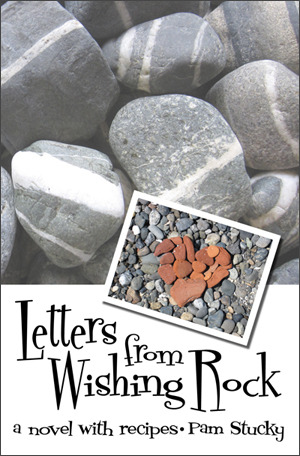 Part of a Series: Wishing Rock

Pam Stucky's charming debut novel is already garnering rave reviews and demands for book two in the Wishing Rock series. This engaging, fun read is written in the format of letters/e-mails amongst characters. It combines the easy readability of The Guernsey Literary and Potato Peel Pie Society and the sassy, irreverent tone of Bridget Jones' Diary, with the slice-of-life sensibilities of Alexander McCall Smith's 44 Scotland Street or Ladies' Detective Agency series.

What would happen if everyone in town lived in the same building? Ruby Parker is about to find out. Her fiancé has left her and she needs a fresh start, so she moves to Wishing Rock, Washington, a small town on Dogwinkle Island in the waters near Seattle, where she meets a quirky cast of characters who quickly become family. Letters between the neighbors and their friends chronicle the twists and turns of the characters’ daily lives. There’s Jake, a handsome and charming first-year medical student who catches Ruby’s eye from the start, despite his being over a decade younger. Millie, a Wishing Rock resident for forty years, runs the town’s library, post office, newsletter and grocery store, knows everyone and everything, and shares the history of the area with her playful wit. World traveler and psychic Alexandra bestows insight and wisdom with humor and compassion, and Ruby’s Gran heads to the United Kingdom, heeding her own advice to seize the day. And then there’s Ed; if something fun is going on, the grandson of the town’s founding father is likely at the center of it. Amidst all this action, Ruby manages to find passion and companionship, but will she be able to open her heart to love?

Online dating, a group trip to Scotland, a discussion about dogwinkles, a fateful hoedown, and friendships old and new, all interspersed with recipes from some of the town’s best cooks, make Wishing Rock come alive in this delightful and insightful look at life, love, relationships, and community.

Its interesting to note that 99 percent of the book is written from the women's points of view, and it shows multifaceted women. (Yes, its more than just a focus on men...) The characters are memorable and very well drawn: Ruby is a contemporary woman that struggles with finding The One after the love of her life broke up with her. She is resilient, takes chances whenever she can and is a bit of an optimist.  Her younger sister seems to look up to Ruby and both enjoy a close relationship to one another as well as to their grandmother. Their grandmother, despite the age, is a strong role model and upholds as well as encourages her granddaughters and she's very creative with ideas. Other characters include Alexandra, a wise psychic as well as being close to Ed; then there's Millie who shares the town history and is content with her life but who hides a tragic past.

Starting over can be the best thing to happen to someone

The story is written in an email/texting format in first person narrative and is both hilarious as well as wise. For me as well the story became addictive and I couldn't wait to see what will happen next to the characters. The points of view are from different characters, including those outside the Wishing Rock such as Ruby's sister and grandmother.

I'll be honest: I loved reading this book. Its philosophical, hilarious, has intriguing as well as memorable characters, its also written in an epistolary format and the author has done a very good in creating the unique voices per character, which is a difficult task as I imagine. I hadn't tried the recipes, but I loved being part of the Wishing Rock community as well as getting to know Ruby, her grandmother, her sister and her friends and family. It is a very modern read and people do act like contemporary human beings, which I don't mind, but I imagine that some others will. I think I did have some trouble in remembering Alexandra, although she's an older psychic woman and I can't wait to learn more about the community.

This was given to me by the author. Thank you!

4 out of 5
(0: Stay away unless a masochist 1: Good for insomnia 2: Horrible but readable; 3: Readable and quickly forgettable, 4: Good, enjoyable 5: Buy it, keep it and never let it go.)
2011 4 stars Book Review digital reading given by author goodreads Pam Stucky