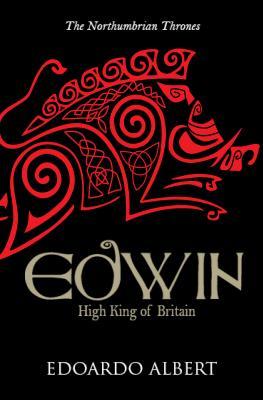 In 604 AD, Edwin, the deposed king of Northumbria, seeks refuge at the court of King Raedwald of East Anglia. But Raedwald is urged to kill his guest by Aethelfrith, Edwin's usurper. As Edwin walks by the shore, alone and at bay, he is confronted by a mysterious figure--the missionary Paulinus-- who prophesies that he will become High King of Britain. It is a turning point.

Through battles and astute political alliances Edwin rises to power, in the process marrying the Kentish princess Aethelburh. As part of the marriage contract the princess is allowed to retain her Christian faith. But, in these times, to be a king is not a recipe for a long life.

This turbulent and tormented period in British history sees the conversion of the Anglo-Saxon settlers who have forced their way on to British shores over previous centuries, arriving first to pillage, then to farm and trade--and to come to terms with the faith of the Celtic tribes they have driven out.

The dramatic story of Northumbria's Christian kings helped give birth to England as a nation, English as a language, and the adoption of Christianity as the faith of the English.

I feel that the characters weren't really in depth and they seemed to me a bit simplistic. I think I liked Edwin the best, he sort of struck me as King Arthur like, someone who is the ideal leader although he does have a lot of regrets, and its unfortunate that one of those isn't addressed properly. Edwin tries to balance survival, his family as well as uniting England. Other characters include his sons, Osfrith who happens to be the eldest and is the type to prefer might over cunning, while Eadfrith is the younger and is the type that likes cunning. There is also the christian wife AEthelburh who is best described as brave, and paulinius who happens to be a priest from Rome who tries to get the people to accept jesus.

Short of saying the obvious, I would guess the theme could be is to not hold on to old outdated views.

The story is written in third person narrative from Edwin's and few other characters' points of view. I didn't enjoy the christian aspects of the story to be honest, but it's just me though, and it doesn't help that my background is of being a persecuted religion. The writing is top notch, and I enjoyed the beginning of the story especially. I personally would ask if some chapters could at least mention how many years have passed because there is some awkwardness in reading it.

Edoardo Albert is a writer of Sri Lankan and Italian extraction based in London. The best response to his writing was when he reduced a friend to helpless, hysterical, rolling-on-the-floor-holding-his-stomach laughter. Unfortunately, the writing in question was a lonely hearts ad. He hopes to produce similar results in readers, without inadvertently acquiring another wife.
For more information, please visit Edoardo Albert’s website. You can also connect on Facebook and Twitter.
Opinion:

Okay, good news and bad news when it comes to this book: the good news is that the writing is enjoyable and for me it feels very accessible. Also, before accepting this book for the tour, I recall reading a review on Goodreads where the person complains that too much time is spent on christianity. Much to my relief, while time is spent with christianity, its not the whole book. I can even sort of understand why Edwin converted to it. I also liked that the important things are located on the front such as the map of United Kingdom, the character sheet and the glossary, and that they are even there in the first place because there is understanding that not everyone has the knowledge of 7th century. Okay, the not-so good is that I think I might have been the wrong audience for the book because it was hard for me to separate what I know of it from the last 2,000 years versus the way paulinius portrayed it in the 7th century. I also would have liked it if more indication of how much time has passed was given instead of the characters mentioning it. I think I also expected it to be more descriptive about Edwin's religion or about daily life in the 7th century which I barely even got. Something else that's pretty cool for the book is that I was able to keep the characters straight in my mind without confusing who's who.

3 out of 5
(0: Stay away unless a masochist 1: Good for insomnia 2: Horrible but readable; 3: Readable and quickly forgettable, 4: Good, enjoyable 5: Buy it, keep it and never let it go.)
2014 3 Stars Book Review book tour Edoardo Albert goodreads No longer owned Paper Form