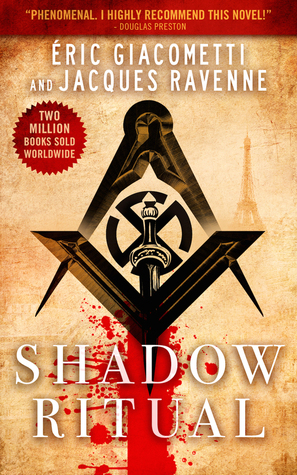 An electrifying thriller about the rise of extremism. Two slayings—one in Rome and one in Jerusalem—rekindle an ancient rivalry between modern-day secret societies for knowledge lost at the fall of the Third Reich. Detective Antoine Marcas unwillingly teams up with the strong-willed Jade Zewinski to chase Neo-Nazi assassins across Europe. They must unravel an arcane Freemason mystery, sparked by information from newly revealed KGB files. Inspired from the true story of mysterious Freemason files thought to hold a terrible secret, stolen by the SS in 1940, recovered by the Red Army in 1945 and returned half a century later.

Strangely enough, the characters I liked were the villains such as the Gardener and Joana, including the French turned German officer. Why strangely enough? Considering the fact that they are anti-Jewish and that I am what I am, well, makes sense why its strange. I didn't like them for their beliefs or ideologies, but I felt that they had a lot more depth and more interest than the protagonists in the series; Marcas and Jade. For some odd reason, at least to me, Marcas and Jade seemed to lack that depth and they weren't as compelling as the antagonists. The women are definitely strong in the book and they aren't wilting damsels and hold their own.

I am honestly not sure what the theme should have been

The story is in third person narrative from what seems to be everyone's point of view. I have to admit that it was kind of an awkward reading although the characters are separated by chapters. Although interesting, the characters strike me as a bit undeveloped and I wasn't able to tie up their actions properly.

Jacques Ravenne is a literary scholar
who has also written a biography of the Marquis de Sade
and edited his letters.
He loves to explore the hidden side of major historical events.

Eric Giacometti was an investigative reporter
for a major French newspaper.
He has covered a number of high-profile scandals
and has done exhaustive research in the area of freemasonry.

Anne Trager loves France so much she has lived there for 27 years and just can’t seem to leave. What keeps her there is a uniquely French mix of pleasure seeking and creativity. Well, that and the wine. In 2011, she woke up one morning and said, “I just can’t stand it anymore. There are way too many good books being written in France not reaching a broader audience.” That’s when she founded Le French Book to translate some of those books into English. The company’s motto is “If we love it, we translate it,” and Anne loves crime fiction, mysteries and detective novels.
***
Follow Le French Book on Twitter  | on Facebook
Sign up to receive their latest news and deals.
Buy the book | on Amazon  | Barnes & Noble  | Indiebound  | upcoming on Apple + Kobo
***

I'm a little torn between the rating; on one hand some of the plot seemed to make little sense for me, but on the other hand, I enjoyed learning about the secret societies such as Freemasons and Thule (supposedly Hitler borrowed ideologies from them...) the story wasn't as suspenseful as I hoped, and I also didn't learn a lot about the characters as well. I think it is towards the very end that the story didn't seem to make much sense for me. I do hope that I will have a chance to read future installments so perhaps the story will start to make more sense for me, and yes, I do want to learn more about secret societies.