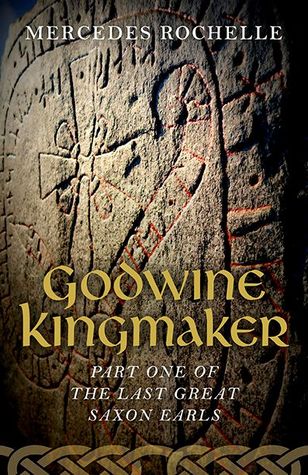 Name of Book: Godwine the Kingmaker

Harold Godwineson, the Last Anglo-Saxon King, owed everything to his father. Who was this Godwine, first Earl of Wessex and known as the Kingmaker? Was he an unscrupulous schemer, using King and Witan to gain power? Or was he the greatest of all Saxon Earls, protector of the English against the hated Normans? The answer depends on who you ask. He was befriended by the Danes, raised up by Canute the Great, given an Earldom and a wife from the highest Danish ranks. He sired nine children, among them four Earls, a Queen and a future King. Along with his power came a struggle to keep his enemies at bay, and Godwine's best efforts were brought down by the misdeeds of his eldest son Swegn. Although he became father-in-law to a reluctant Edward the Confessor, his fortunes dwindled as the Normans gained prominence at court. Driven into exile, Godwine regathered his forces and came back even stronger, only to discover that his second son Harold was destined to surpass him in renown and glory.

The main character include Godwine, a man of Saxon ancenstry who makes a choice to go over to the Danes and begins rising through the ranks. He is intelligent, passionate, wise, loyal, and determined, although he is blind to Swegn's faults. Other characters include Gytha, Godwine's wife from the Danes who at first resists the man but then starts to love him. There is also Canute, a Danish king who helps Godwine rise through the ranks and seems to favor him; while he is a good king, he doesn't forgive betrayal easily or at all. Jarl Ulf is another man who finds Godwine and is instrumental to helping him rise. Jarl Ulf is a bit fun loving and merciful and everyone looks up to him. Edward the Confessor becomes a king and he is very devoted and religious; sometimes too religious for his own good. He also is disloyal and seems to be an antagonist to Godwine and his family.

I'm not really sure what the theme was, maybe that nothing really remains stable is my guess?

The story is written in third person narrative, primarily from Godwine's point of view, although at times the reader does travel into Gytha's and Edward the Confessor's minds to learn what is going on. In a lot of ways this is similar to Heir to a Prophecy because the author creates very strong relationships between men, in particular the ruling kings and their subjects which reminded me of King Malcolm and Walter. However, while I appreciated the love scenes, I don't think they seemed to fit in into the story and I was surprised by their inclusion. Born in St. Louis MO with a degree from University of Missouri, Mercedes Rochelle learned about living history as a re-enactor and has been enamored with historical fiction ever since. She lives in Sergeantsville, NJ with her husband in a log home they built themselves.
For more information please visit Mercedes Rochelle’s website and blog. You can also find her on Facebook, Twitter, and Goodreads.

I've previously read Mercedes Rochelle's book titled Heir to a Prophecy which I've really liked, although I did at times feel it was a bit too long. This is the second book I'm reading, and I have to say that she improved greatly since Heir to a Prophecy. The book is focused on a bigger picture and it helped me a great deal to make sense of what is going on in England during that time. Previously I have read G.K Holloway's book titled 1066, and although I had just a skeleton of information, this book helped me form the tendons and acted as muscles and meat to the story. I enjoyed getting to know Godwine and seeing the other sides to the characters I met in G.K Holloway's novel. I look forward to reading future installments of Godwine Kingmaker

4 out of 5
(0: Stay away unless a masochist 1: Good for insomnia 2: Horrible but readable; 3: Readable and quickly forgettable, 4: Good, enjoyable 5: Buy it, keep it and never let it go.)
2015 4 stars Book Review book tour goodreads Mercedes Rochelle Paper Form