G591 Book Review of The Mapmaker's Children by Sarah McCoy 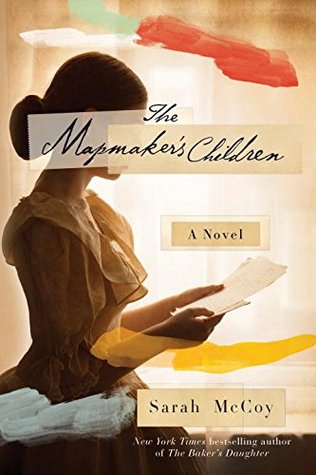 Name of Book: The Mapmaker's Children

When Sarah Brown, daughter of abolitionist John Brown, realizes that her artistic talents may be able to help save the lives of slaves fleeing north, she becomes one of the Underground Railroad’s leading mapmakers, taking her cues from the slave code quilts and hiding her maps within her paintings. She boldly embraces this calling after being told the shocking news that she can’t bear children, but as the country steers toward bloody civil war, Sarah faces difficult sacrifices that could put all she loves in peril.

Eden, a modern woman desperate to conceive a child with her husband, moves to an old house in the suburbs and discovers a porcelain head hidden in the root cellar—the remains of an Underground Railroad doll with an extraordinary past of secret messages, danger and deliverance.

Ingeniously plotted to a riveting end, Sarah and Eden’s woven lives connect the past to the present, forcing each of them to define courage, family, love, and legacy in a new way.

Two characters that play a very important role in the book are Sarah Brown, John Brown's daughter who is resourceful, talented in the drawing, has a very warm heart and wants to do what she can for others. She also focuses on the present day rather than focusing on her lack of ability to procreate. In beginning of the story, I feel that Eden didn't really match up to Sarah Brown and I couldn't understand the connection between the two. Eden is determined, angry, bitter in the beginning of the story, but as time went on, she grew warmer and also wants to focus more on today and what she could do now rather than what she cannot do. There are other characters, but I feel that they don't play a big role as these two do.

There are many ways to create a family and a legacy

The story is in third person narrative both from Sarah Brown's point of view and from Eden's point of view, and each chapter goes back and forth from 1850s-1860s to 2014. I do have to say that I didn't understand the point of the prologue and although the reader learns a little bit of why towards the end, it didn't do a good job of tying the two separate point of views together. 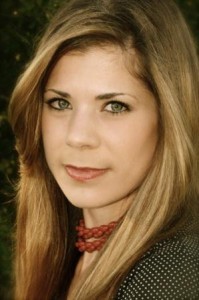 SARAH McCOY is the  New York Times, USA Today, and international bestselling author of The Baker’s Daughter, a 2012 Goodreads Choice Award Best Historical Fiction nominee; the novella “The Branch of Hazel” in Grand Central; The Time It Snowed in Puerto Rico; and The Mapmaker’s Children (Crown, May 5, 2015).
Her work has been featured in Real Simple, The Millions, Your Health Monthly, Huffington Post and other publications. She has taught English writing at Old Dominion University and at the University of Texas at El Paso. She calls Virginia home but presently lives with her husband, an Army physician, and their dog, Gilly, in El Paso, Texas. Sarah enjoys connecting with her readers on Twitter at @SarahMMcCoy, on her Facebook Fan Page or via her website, www.sarahmccoy.com.

First of all my apologies for the late review for The Mapmakers Children; second of all, in many ways, its a very surprising and a very warm book that includes ways humans can create legacy outside of childbearing, as well as the people and pets that come in and out of the lives. What's also not mentioned is that its a good book for dog-lovers, about how its possible for dogs to heal the lives of their owners in one way or the other. I really enjoyed reading the story, and felt it was relevant to today and to people that want but cannot have children. What is also unique is that in the story its the women who are much harder on themselves than the men. A fast and an enjoyable read. 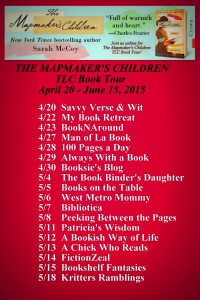 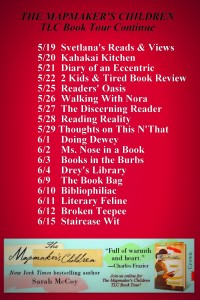