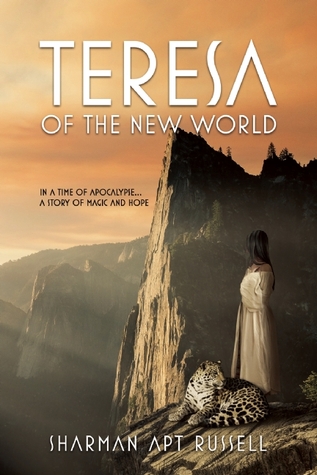 Name of Book: Teresa of the New World

In 1528, the real-life conquistador Cabeza de Vaca shipwrecked in the New World where he lived for eight years as a slave, trader, and shaman. In this lyrical weaving of history and myth, the adventurer takes his young daughter Teresa from her home in Texas to walk westward into the setting sun, their travels accompanied by miracles--visions and prophecies. But when Teresa reaches the outposts of New Spain, life is not what her father had promised.

As a kitchen servant in the household of a Spanish official, Teresa grows up estranged from the magic she knew as a child, when she could speak to the earth and listen to animals. When a new epidemic of measles devastates the area, the sixteen-year-old sets off on her own journey, befriending a Mayan were-jaguar who cannot control his shape-shifting and a warhorse abandoned by his Spanish owner. Now Teresa moves through a land stalked by Plague: smallpox as well as measles, typhus, and scarlet fever.

Soon it becomes clear that Teresa and her friends are being manipulated and driven by forces they do not understand. To save herself and others, Teresa will find herself listening again to the earth, sinking underground, swimming through limestone and fossil, opening to the power of root and stone. As she searches for her place in the New World, she will travel farther and deeper than she had ever imagined.

Rich in historical detail and scope, Teresa of the New World takes you into the dreamscape of the sixteenth-century American Southwest.

The main characters include Teresa, a half Native American half Spanish daughter of Cabeza de Vaca who has powers to commune with nature and even become part of it. She is close to her father and is willing to do anything for him. She is resourceful, shy, intelligent and traumatized. Then there is Plague who is a doppleganger and depends on people to make them sick. He takes physical shapes of the dead and has love/hate relationship with humans. Pomo is a young boy of Mayan origins who also can shape-shift into a jaguar. As a human boy he is bossy, a bit disobedient and depends on others to take care of him. As a jaguar, Pomo is at war with Teresa and becomes determined to keep this shape. There is also a war-horse who is from Spain and is dedicated to a previous master. He is best described as rude and arrogant although he does change throughout the story. He warns Teresa of approaching danger.

Opening up is a great risk

The story is in third person narrative from Teresa's point of view and it reads as more of a legend or a fairytale rather than a novel. There is a great deal of focus on nature as well as on the dangers faced by Native Americans from Europeans, and how risky it is to open up the heart towards new and exciting. I also would like more sequels about Teresa and her companion. With that being said, I would have liked for characters to be more developed, in particular the Mayan werejaguar boy.

Teresa of the New World Available at Sharman Apt Russell has lived in Southwestern deserts almost all her life and continues to be refreshed and amazed by the magic and beauty of this landscape. She has published over a dozen books translated into a dozen languages, including fiction and nonfiction. She teaches graduate writing classes at Western New Mexico University in Silver City, New Mexico and Antioch University in Los Angeles, California and has thrice served as the PEN West judge for their annual children’s literature award. Her own awards include a Rockefeller Fellowship, the Mountains and Plains Booksellers Award, a Pushcart Prize, and the Henry Joseph Jackson Award.
For more information visit Sharman Russell’s website. You can also find her on Facebook and Goodreads.

The cover certainly matched the atmosphere and the attitude of a story, and at times I felt as if  I uncovered a long lost fable rather than a novel. The story is both haunting and magical and it can be interpreted in a number of different ways which means that there is no single right way to figure out the story. The fable or legend also explores two sides of people, being civilized and being part of nature, what is the right path? Earlier, years and years ago, I read She Who Remembers Trilogy by Linda Lay Schuler, and reading Teresa of the New World really reminded me of that, except it really traveled deeply into the supernatural elements that fit right into the world recently discovered by Europeans.

4 out of 5
(0: Stay away unless a masochist 1: Good for insomnia 2: Horrible but readable; 3: Readable and quickly forgettable, 4: Good, enjoyable 5: Buy it, keep it and never let it go.)
2015 4 stars Book Review book tour goodreads Paper Form Sharman Apt Russell