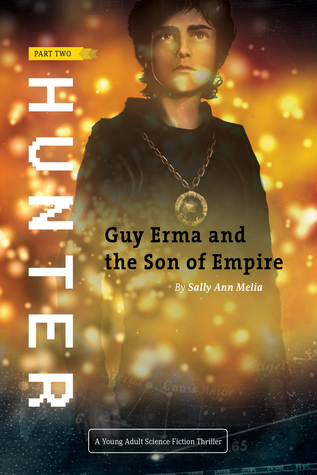 Name of Book: Guy Erma and the Son of Empire Part Two Hunter

Part of a Series: Guy Erma and the Son of Empire

HUNTER. Part 2 of Guy Erma and the Son of Empire

The new serialisation of Guy Erma and the Son of Empire.

"Guy Erma and the Son of Empire by Sally Ann Melia is a fast-paced and exciting YA military sci-fi read. Don't miss this one!" — Brent LeVasseur, author and illustrator of the Aoléon The Martian Girl series.

13-year-old Teodor was taken by the vicious Battle Borgs of Dome and now he must fight to survive.
13-year-old Guy Erma has been offered a chance to fight for his place in the Dome Elite. Only who will be his opponent? Will he face a Battle Borg of Dome?
Once they were heroes. These men died as heroes in battle. Now they have been reincarnated as the fearsome vanguard of the Dome Elite. They are the Battle Borgs of Dome
Two boys as different as any two boys might be. They face the same enemy, the same danger, the same fear - dare they trust each other?
Reviews:
"One of the most powerhouse imaginations I’ve encountered in sci-fi..." — Dean C. Moore, The Warlock’s Friend.

"Set in a world where fashion and fun hide treacherous politics and danger, Guy Erma and the Son of Empire will keep you enthralled." — Sherrill Nilson, Karda: Adalta Vol. 1.
A good old-fashioned political thriller - if you loved both Frank Herbert’s Dune and Suzanne Collins’ The Hunger Games - you will adore Guy Erma.

The main characters include Prince Teo, a talented thirteen year old boy that is good at fighting and is resourceful, privledged, and feels he is entitled to a lot of things. He is also brave and will reward goodness. Guy Erma is a prodigy who happens to have no legitimate parents and lives in something akin to courtesan house. He is best described as brave, righteous and strongly principled as well as loyal to those who are good to him. Sayginn is Prince Teo's mother, a strong and loyal woman who is devoted to the memory of Prince Teo's father and younger brother and to Prince Teo as well. She wants to live her own life and not for someone else. Karl comes from an alien royal family and has strong telepathy skills as well as his own agenda of having everyone be equal. He tries his best to help Sayginn to figure out what might have happened to Prince Teo.

Life can never be predicted

The story is in third person narrative from Teo's, Guy's, Karl's and Sayginn's points of views. The characters were all written well and were all memorable, in particular Guy Erma and Sayginn, who is Teo's mother and is a queen. Guy Erma interested me because he seems an underdog, someone you want to root for. Story wise, I got into the story almost towards the end, at least for me it became a lot more interesting. I think the reason why I got into the story towards the very end is because I kept trying to find my footing and trying to figure the bigger picture. 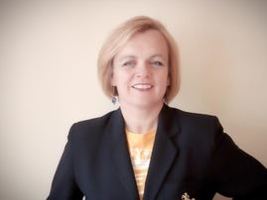 The author was born in Wallasey, England, in 1964, and moved to the South of France when she was eleven. She spent her teenage years living in the cosmopolitan city state of Monaco and became immersed in its many languages and cultures. An English girl in a French school, for three hours each week she would sit at the back of the class as her colleagues learnt English. To pass the time, she wrote stories. This led to a lifetime of writing novels, scripts, stories and articles. In her working life, Sally writes marketing communications and manages large international websites.

In 2010, Sally joined the Hogs Back Writers, a club located on the outskirts of Guildford, and she set about turning an old manuscript into this novel: Guy Erma and the Son of Empire. Sally currently lives in Farnham, and she is married with two children.

I have to say that the first part and the first half of the book were confusing for me, and although I did understand what was going on, I struggled with knowing who's who as well as the technology that was available. However, the deeper I got into the story, it became more interesting and gripping, especially towards the end of the story when the heroes began to fight with one another. I think the trilogy is the division of the author's early work titled Guy Erma and the Son of Empire which is all three combined, while particular series is divided into three distinct works. I do look forward to reading more of Guy Erma's adventures and seeing what is going on in that world.