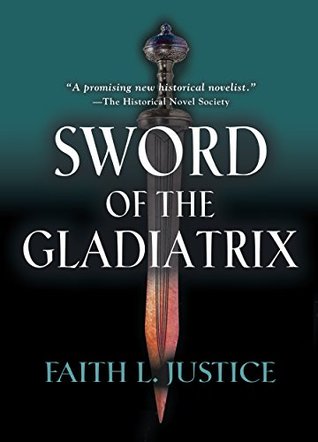 Name of Book: Sword of the Gladiatrix

An action-packed tale that exposes the brutal underside of Imperial Rome, "Sword of the Gladiatrix" brings to life unforgettable characters and exotic settings. From the far edges of the Empire, two women come to battle on the hot sands of the arena in Nero's Rome: Afra, scout and beast master to the Queen of Kush; and Cinnia, warrior-bard and companion to Queen Boudica of the British Iceni. Enslaved, forced to fight for their lives and the Romans' pleasure; they seek to replace lost friendship, love, and family in each other's arms. But the Roman arena offers only two futures: the Gate of Life for the victors or the Gate of Death for the losers.

The main characters include Afra and Cinnia. Afra comes Kush which is part of the land of Egypt and is a fierce and brave huntress as well as a fighter. She is loyal to those who care about her and will do anything for them. I have to say that out of the two, she is my favorite. Cinnia comes from the Celtic culture and although a warrior, I feel that not much is known about her personality besides the fact that she is loyal to the queen and is obedient. There are other characters who are drawn well, but they are not main, although I did like the trader and his wife.

Love happens when you least expect it

In beginning and end the story is told in first person narrative from Afra's point of view, while the middle is told in third person narrative from Afra's and Cinnia's points of view. One of the things that attracted me to reading and reviewing the book is the pitch of lesbian women gladiators, and the fact that recently gay marriage became legal in all states, it turned out to be a fitting and an unexpected choice to mark the event. However, I did have a few issues with the story, mainly that the romance between the two characters happened a little too fast and that if time passed, there are barely hints of it passing. But still I am curious about what will happen to the characters in the future.

Sword of the Gladiatrix Available At

FAITH L. JUSTICE writes award-winning novels, short stories, and articles in Brooklyn, New York. Her work has appeared in Salon.com, Writer’s Digest, The Copperfield Review, the Circles in the Hair anthology, and many more. She is a frequent contributor to Strange Horizons, Associate Editor for Space and Time Magazine, and co-founded a writer’s workshop many more years ago than she likes to admit. For fun, she digs in the dirt—her garden and various archaeological sites.
For more information visit Faith L. Justice’s website. You can also find her onFacebook, Twitter, and Goodreads.

I really enjoyed the attention that the author gives to historical details as well as creating an interesting and a plausible story of two women falling in love. The story is immersive and one is encouraged to keep going. However, what I did dislike about the story is that I was confused by how much time passed in the book, although I estimate that its about two years? And also, I didn't like the implication that gang rape of a woman leads to her becoming a lesbian, which is what I felt the book said. I know its not the author's intention because of the way Afra was portrayed, but prior to rape not once has Cinnia expressed that she is either a lesbian or a bisexual. In fact she sounds like a heterosexual woman, but after the gang rape, she is a lesbian.

Sword of the Gladiatrix Blog Tour

4 out of 5
(0: Stay away unless a masochist 1: Good for insomnia 2: Horrible but readable; 3: Readable and quickly forgettable, 4: Good, enjoyable 5: Buy it, keep it and never let it go.)
2015 4 stars Book Review book tour Faith L Justice goodreads Paper Form