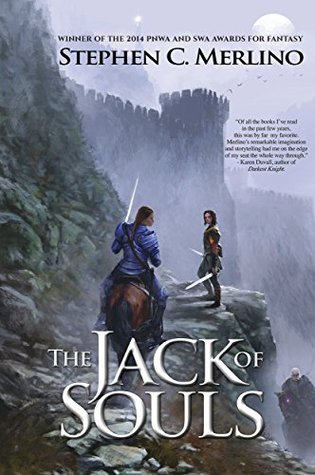 Name of Book: The Jack of Souls

Harric is an outcast rogue who must break a curse put on his fate, or die on his next birthday. As the day approaches, nightmares from the spirit world stalk him and tear at his sanity; sorcery eats at his soul.

To survive, he’ll need more than his usual tricks. He’ll need help—and a lot of it—but on the kingdom’s lawless frontier, his only allies are other outcasts. One of these outcasts is Caris, a mysterious, horse-whispering runaway, intent upon becoming the Queen’s first female knight. The other is Sir Willard—ex-immortal, ex-champion, now addicted to pain-killing herbs and banished from the court.

With their help, Harric might keep his curse at bay. But for how long?

And both companions bring perils and secrets of their own: Caris bears the scars of a troubled past that still hunts her; Willard is at war with the Old Ones, an order of insane immortal knights who once enslaved the kingdom. The Old Ones have returned to murder Willard and seize the throne from his queen. Willard is both on the run from them, and on one final, desperate quest to save her.

Together, Harric and his companions must overcome fanatical armies, murderous sorcerers, and powerful supernatural foes.

Alone, Harric must face the temptation of a forbidden magic that could break his curse, but cost him the only woman he’s ever loved.

Main characters include Harric, a loyal happy go lucky rogue on the surface, but on the inside he is insecure, worrying and hopes to impress someone special to his heart. He also seems to be a caretaker of sorts towards Caris and does whatever he can for her. Caris is a woman who seems to be a horse-talker, and if  I didn't know better, at least in modern terms she seems to have Asperger's or be on the Autism spectrum. She is loyal and seems to be conflicted and lost between the world of horses and real world. Sir Willard is a complex character that used to be a blood thirsty knight, but then he seems to have reformed and only do whatever he can for the lesser folk. What is remarkable is how Sir Willard continues to hold on to his humanity without letting it go.

Help comes when you least expect it

The story is written in third person narrative, mainly from Harric's and Sir Willard's points of view, and there is complexity within the characters and their relations to one another. With the plot, I feel that more time should have been spent upon on connecting the various plotlines, and few times I forgot what was their purpose in journey?

Author Information:
(From pump up your books) 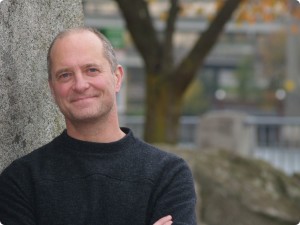 Stephen C. Merlino lives in Seattle, WA, where he writes, plays, and teaches high school English. He lives with the world’s most talented and desirable woman, two fabulous children, and three attack chickens.
Growing up in Seattle drove Stephen indoors for eight months of the year. Before the age of video games, that meant he read a lot. At the age of eleven he discovered the stories of J.R.R. Tolkein and fell in love with fantasy.
Summers and rare sunny days he spent with friends in wooded ravines or on the beaches of Puget Sound, building worlds in the sand, and fighting orcs and wizards with driftwood swords.
About the time a fifth reading of The Lord of the Rings failed to deliver the old magic, Stephen attended the University of Washington and fell in love with Chaucer and Shakespeare and all things English. Sadly, the closest he got to England back then was The Unicorn Pub on University Way, which wasn’t even run by an Englishman: it was run by a Scot named Angus. Still, he studied there, and as he sampled Angus’s weird ales, and devoured the Unicorn’s steak & kidney pie (with real offal!), he developed a passion for Scotland, too.
In college, he fell in love with writing, and when a kindly professor said of a story he’d written, “You should get that published!” Stephen took the encouragement literally, and spent the next years trying. The story remains unpublished, but the quest to develop it introduced Stephen to the world of agents (the story ultimately had two), and taught him much of craft and the value of what Jay Lake would call, “psychotic persistence.”
Add to that his abiding love of nerds–those who, as Sarah Vowel defines it, “go too far and care too much about a subject”–and you have Stephen Merlino in a nutshell.
Stephen is the 2014 PNWA winner for Fantasy.
He is also the 2014 SWW winner for Fantasy.
His novel, The Jack of Souls is in its fourth month in the top ten on Amazon’s Children’s Fantasy Sword & Sorcery Best Sellerlist, and among the top three in Coming-of-Age.

This has been a very long time in coming. I'm not sure why I kept putting off reviewing the book, but today is the day. I actually really enjoyed reading the story and seeing a unique fantasy world comprised of Harric, his loyal companion Caris, and Sir Willard,the famous Knight that is keeping a few dangerous secrets from the entourage. I have to admit that I was lost when it came to some things such as the royalty and why Harric has such animosity towards his own mother, which makes it a very intriguing read in my opinion. The motives of the characters are very complex and are a worthwhile read, but yes, how does all of this connect is something I didn't really understand.

4 out of 5
(0: Stay away unless a masochist 1: Good for insomnia 2: Horrible but readable; 3: Readable and quickly forgettable, 4: Good, enjoyable 5: Buy it, keep it and never let it go.)
2014 4 stars Book Review book tour goodreads No longer owned Paper Form Stephen C Merlino