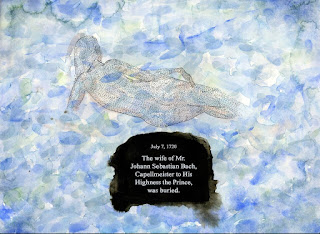 Excerpt - The Death of Maria Barbara

Life, then, was very good. But as the Fates so often decree, perhaps especially in their interactions with the greatest among us, about three years into his sojourn at Cöthen, Bach experienced yet more tragedy — perhaps the most heart-wrenching of his life.

After 13 years of blissful married life with his first wife, misfortune overtook him, in the year 1720, upon his return to Cöthen from a journey with his Prince to Carlsbad, of finding her dead and buried, although he had left her hale and hearty on his departure. The news that she had been ill and died reached him only when he entered his own house. [Bib. 1]

Prince Leopold was fond of showing off his Capellmeister, the core members of his capelle, and some of his new and dearly purchased musical instruments. And so Bach was away for more than a month before he returned home. Some authors speculate that the Prince may have been notified of Barbara’s death by courier while they were still at Carlsbad, but chose not to inform Bach. If so, was this so as not to interrupt an otherwise enjoyable vacation?

He had left her in good health and spirits; now a sudden death had snatched her away in the bloom of life, not yet 36 years old, without any news of it having reached her distant husband … it is easy to guess the feelings that must have tortured his strong, deep nature as he stood by the grave of the wife who had been his companion through the years of his youthful endeavor, and of his first success, only to be snatched from him when fortune was at its height. [Bib. 3]

No one knows the cause of death. The official death register simply reads:

July 7, 1720 — The wife of Mr. Johann Sebastian Bach, Capellmeister to His Highness the Prince, was buried.