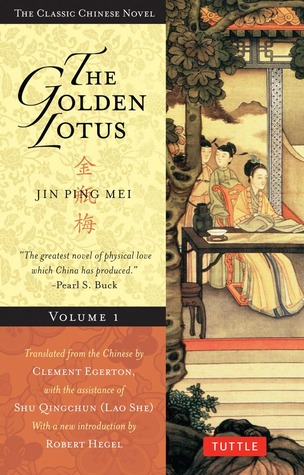 Name of Book: The Golden Lotus, aka Jin Ping Mei aka The Plum in the Golden Vase

Part of a Series: This is first part of Jin Ping Mei, spanning from chapters 1-53

The Golden Lotus (Jin Ping Mei) has been called the fifth greatest work in all of Chinese literature and one of the Four Masterworks of the Ming novel. Anonymously written, it was admired in its own time for its literary qualities and biting indictment of the immorality and cruelty of its age. Yet it has also been denigrated as a dirty book for its sexual frankness. It centers on Ximen Qing, a wealthy, young, dissolute merchant, and his marriage to a fifth wife, Pan Jinlian, literally "Golden Lotus." In her desire to influence her husband, and, through him, control the other wives, concubines, and entire household, she uses sex as her main weapon. The Golden Lotus lays bare the rivalries within this wealthy family while chronicling its rise and fall. It fields a host of vivid characters, each seeking advnatage in a corrupt world. The first volume charts the rise of Pan Jinlian and the rising fortunes of Ximen Qing as he secures the power of his house.

This edition features a new introduction by Robert Hegel, who situates teh novel for contemporary readers and explains its greatness as the first single-authored novel in the Chinese tradition. This translation contains the complete, unexpurgated text as translated by Clement Egerton with the assistance of Shu Qinggchun, later known as Lao She, one of the most prominent Chinese writers of the twentieth century. The translation has been pinyinized and corrected fro the for the Tuttle Classics edition.

There are way too many characters to go through, but here are a few main ones: first is Ximen Qing who is left an incredibly vast fortune and he uses that fortune very liberally. He is ambitious, lavish and hedonistic and is never satisfied with anything or anyone. Pan Jinlian used to be a wife to Wu Da, but she tended to berate and abuse her husband a lot for being poor and for not making enough money. She is a little bit like Scarlett O'Hara, in that she wants the fool's gold rather than the pure gold. She also is capable of doing anything to anyone to achieve her own ends. (Sounds like Chinese Scarlett O'Hara...) Li Ping'er becomes Ximen Qing's sixth wife and she used to be married to his friend Hua Zixu. Aside from how she ended up with Ximen Qing, she is a good woman and very nice to servants. Li Jiao'er is Ximen Qing's second lady. Wu Yeniang is Ximen Qing's principal wife, after his first one, a Miss Chen dies, Meng Yulou is Ximen Qing's Third Wife,and is a widow of a merchant named Yang and indescribably wealthy, and Pang Chunmei was at first maid to Wu Yueniang but then starts working for Pan Jinlian and she often uses tricks and schemes to get other ladies riled up against her and Pan Jinliang. Sun Xue'e is an unofficial fourth wife of Ximen Qing, but she is a servant.

What is thought of love is lust

The story is in third person narrative from what seems to be everyone's point of view, from Pan Jinlian, Ximen Qing, Ximen Qing's other wives, Wu Da and Wu Song and so forth. Although I had some difficulty in remembering the wives and the people that are in Ximen Qing's life, probably due to names, that still didn't detract from enjoying the story which is filled with a lot of shocks and unexpected turns. Unfortunately the author was not masterful at keeping up with the pacing, at least in my opinion because the first half maybe is speedy, but when the book does slow down, it slows down and it isn't until the very end that the author resumes the fast pacing once more. What is also unique is that a lot of the story takes place in the women's rooms with female characters, I guess a little bit of a precursor to Dream of the Red Chambers by Cao Xueqin, with one major difference: the women in Dream of the Red Chamber are potrayed a whole lot more positively, and the women in Dream of the Red Chamber feel more human, while in The Golden Lotus they feel like, well, either medusas or harpies on a rampage.

Author Information:
(From back of the book)

Lanling Xiaoxiaosheng: No one is certain who he is aside from the fact he wrote this novel around 1590 ME.

Clement Egerton was at various tiems a senior officer in the British army, an Anglican bishop, and a writer, editor and photographer, but he is best known for his enduring translation of The Golden Lotus.

Shu Qingchun became famous as the Beijing novliest and dramatist Lao She, whose best-known work may be Rickshaw Boy. He was killed, or committed suicide, during the Cultural Revolution.

Robert Hegel is the Liselotte Dieckmann Professor of Comparative Literature and a professor of Chinese in East Asian Languages and Cultures at Washington University in St. Louis Missour.

I can honestly say that my journey through this book is not what I had in mind or what I had expected. I'm not sure what I had expected, but it wasn't to learn very valuable lessons about how corrupt world works. A number of people were shocked when they saw what I was reading. That dirty book? Why not something else, like The Three Kingdoms? (I did read The Three Kingdoms later on, but surprisngly, I didn't learn as much as as I did from The Golden Lotus.) If anyone was to ask someone from China about this book, the response would be, its a dirty and forbidden book and its filled with sex. Yes, those points are true, but I feel that sex was used as a selling point to get readers to look over the current society and to try to make reforms before things should spiral out of control. I read the Egerton version, which is two volumes, the first one being chapters 1-53, and the second chapters 54-100. Okay though, my opinion? While I haven't read Roy version of five volumes, I can honestly say that Egerton version can be seen as something to dip toes in before trying out the Roy version because each volume is about 640 pages and its two volumes instead of five.  Apparently for those who have read Water Margins, there is a story of Wu Song's brother named Wu Da who had a gorgeous wife named Pan Jinlian. Pan Jinlian meets Ximen Qing, a merchant from the city, and the two fall in love, and she poisons her husband to be with Ximen Qing. (That's how the story starts out, although there are a lot more details in here. I am honestly thinking that this is sort of fanfiction to these particular characters from Water Margins. ) I do have to say that the index isn't complete as I had hoped, and the footnotes are a bit in my opinion because some things did get translated while others weren't. Also, the sexual aspects are not translated to Latin, much to mine relief.