G425 Book Review of The Three Kingdoms Vol I: The Sacred Oath by Guanzhong Luo 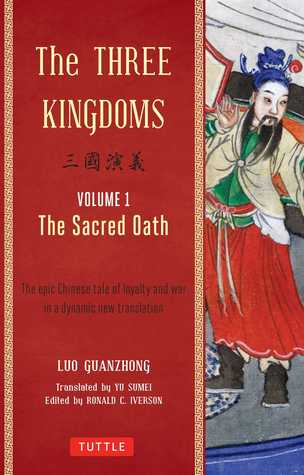 Name of Book: The Three Kingdoms Volume I: The Sacred Oath

Part of a Series: The Three Kingdoms, divided into three volumes

Year it was published: Originally 1300s, but this translation in 2014

This exciting new translation will appeal to modern readers who find the twists and turns of Game of Thrones so compelling.

The Three Kingdoms is an epic Chinese novel written over six centuries ago. It recounts in vivid historical detail the turbulent years at the close of the Han Dynasty, when China broke into three competing kingdoms and over half the population were either killed or driven from their homes. Part myth, part fact, readers will experience the loyalty and treachery, the brotherhood and rivalry of China's legendary heroes and villains during the most tumultuous period in Chinese history.

Considered the greatest work in classic Chinese literature, The Three Kingdoms is read by millions throughout Asia today. Seen not just as a great work of art, many Chinese view it as a guide to success in life and business as well as a work that offers great moral clarity—while many foreigners read it to gain insights into Chinese society and culture. From the saga of The Three Kingdoms, readers will learn how great warriors motivate their troops and enhance their influence, while disguising their weaknesses and turning the strengths of others against them.

This first volume in a trilogy introduces Liu Bei and his sworn brothers-in-arms Zhang Fei and Guan Yu, whose allegiance is sorely tested in a society that is in flux where each group is fighting for its survival against the other.

The characters aren't well developed and the reader never sees them outside the battle field. I also couldn't see a lot of complexity or really understand them, unfortunately. There are a lot of characters, but I'll focus on the primary five; Liu Bei, Guan Yu, Zhang Fei, Cao Cao, and Sun Jian. In the book, Liu Bei is kindhearted, intelligent, has very high standards for himself  and strikes me as kind of a pushover, especially when comparing him to other characters. He is also a distant relative to the royal family. Guan Yu and Zhang Fei are fighters and are extremely loyal to Lui Bei; Zhang Fei also drinks and when he does, he becomes a fearsome fighter. Cao Cao is a minister and an extremely clever man who is also devoted to Han Empire and wars against people in order to preserve the kingdom. Sun Jian is more of a minor character, but his sons will play a very important role in the three kingdoms. Sun Jian finds the Emperor's Seal and keeps it to himself.

The story is in third person omniscient, and there is sort of a removal of the narrator to the audience, at least that's the way it felt to me, and the narrative is nothing but battles. I have to say that in beginning I found the story intriguing and it did draw me in, but chapter after chapter of endless battles can really take a toll on a reader. While I liked the character index, I do feel it was a bit incomplete, and I also would have wanted a map of China in the books so I can easily understand what's going on in the book.

Luo Guanzhong: It is thought that he is either a writer or an editor of the book. Earlier he was an editor to another Chinese classic titled Outlaws of the Marsh.

"Ron Iverson: (From the book) He first visited China in 1984 as the personal representative of the Mayor of Chicago as part of a Sister Cities program. For the past 30 years he has continued to regularly visit China and has founded joint business ventures with Chinese partners and taught Business Strategy at Tongji University in Shanghai. He also personally arranged the first ever exhibition of Forbidden City artifacts from the palace Museum in Beijing to tour the Us.

"Early in his visits to China, Iverson discovered The Three Kingdoms and came to realize the enormous cultural significance the Chinese people place in the book. Believing that one needed to be familiar with the principles revealed in the book in order to find business or political success in China, and being dissatisfied with existing translations, Iverson decided to fund and edit a new translation aimed towards delivering the thrill of a contemporary novel while imparting understanding of a key aspect of Chinese culture.

"Yu Sumei: She is a professor of English at East China Normal University. SHe has translated several English language books into Chinese and is the first native Chinese speaker to translate The Three Kingdoms into English. She invested a total of two years into working on this new translation of The Three Kingdoms, spending the time on sabbatical in New York with her daughter, who typed the translation out as she completed it."

The version I have comes in three volumes, and its all part of one book; the first volume covers chapters 1-35 where Lui Bei and his sworn brothers attempt to make something of themselves and also try to be acknowledged by those in charge.  I've enjoyed a lot of things about The Romance of the Three Kingdoms, but a number of things also have left me disappointed. What I've liked is that the translation is very modern and readable and easy to understand, which is what I enjoyed a lot. I also liked the various schemes that the people played on one another and I also learned a lot of valuable lessons by reading this story. What I didn't enjoy is that I never saw the characters outside the battlefield, and the characters did seem to be a bit undeveloped l to me. I sort of hoped that the story would be both a mix of war and of life during that time, but its nothing but endless battles, therefore if you're hoping to learn about ancient Chinese way of life, or of the customs celebrated, or even see how these wars impacted an ordinary citizen, its a wrong book to pick up. However if you want brotherhood, endless battles, and strategies as well as the relationships between the kingdoms, then enjoy the book!

Given to me by Tuttle Publishing for an honest review