G680 Book Review of The 6:41 to Paris by Jean Philippe Blondel, Alison Anderson 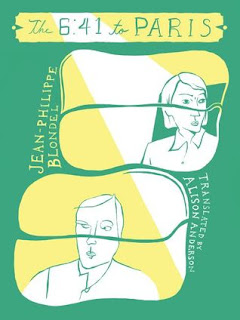 Cécile, a stylish forty-seven-year-old, has spent the weekend visiting her parents in a provincial town southeast of Paris. By early Monday morning, she's exhausted. These trips back home are always stressful and she settles into a train compartment with an empty seat beside her. But it's soon occupied by a man she instantly recognizes: Philippe Leduc, with whom she had a passionate affair that ended in her brutal humiliation thirty years ago. In the fraught hour and a half that ensues, their express train hurtles towards the French capital. Cécile and Philippe undertake their own face to face journey—In silence? What could they possibly say to one another?—with the reader gaining entrée to the most private of thoughts. This is a psychological thriller about past romance, with all its pain and promise.

Main characters include Cecile Duffaut and Phillipe Leduc who were former lovers until a night in London changed everything for them. Cecile is a successful enterpreneur of a cosmetics company and is best described as someone who takes time to achieve her ambitions instead of rushing through them, an ugly duckling who became a swan. She is also proud of her appearance and proud of her style. She also seems to be juggling a lot of things such as a distant husband, elderly parents, a daughter, and the company. Phillipe Leduc is divorced, regretful and seems to have had little to no success since graduating from school. In his youth he is best described as someone who has everything going for him but then seems to squander the opportunities that were given to him. He is also very loyal to friends and family.

Life is full of unexpected surprises

The story is written in first person narrative and although the chapters aren't marked, the author switches from one protagonist to another every few pages; the story begins with Cecile then switches to Philippe then back to Cecile and so forth. The last chapter is when the author switches to third person narrative and the reader gains distance from the protagonists. I really enjoyed the story, and was surprised at how quickly the time passed while reading it and learning about the characters.

Jean-Philippe Blondelwas born in 1964 in Troyes, France
where he lives as an author and English teacher.
His novel The 6:41 to Paris
has been a bestseller in both France and Germany.

Alison Anderson is a novelist and translator of literature from French. Among the authors she has translated are JMG Le Clézio, Christian Bobin, Muriel Barbery and Amélie Nothomb. She has lived in Northern California and currently lives in a village in Switzerland.
Follow New Vessel Press on Twitter | on Facebook
Sign up to receive their latest news and deals.
Buy the book | on Amazon

I'm really beginning to think that 2016 will be the year I'll be introduced to unusual stories or narratives, in a good way that is. The story is unusual and something that isn't easily expected. While the summary seems to be a bit predictable, about long lost lovers meeting one another while riding the same train, the story is anything but predictable because the reader goes into both of the characters' minds and we get a chance to see their thoughts, memories, lives and regrets in a very vivid detail. The narrative is captivating, charming and refuses to let the reader go. The story itself also feels very life-like and its amazing that for a story that has very little dialogue, the reader still learns a lot.

4 out of 5
(0: Stay away unless a masochist 1: Good for insomnia 2: Horrible but readable; 3: Readable and quickly forgettable, 4: Good, enjoyable 5: Buy it, keep it and never let it go.)
2013 2015 4 stars Alison Anderson Book Review book tour goodreads Jean-Phillipe Blondel Paper Form