G664 Book Review of The Soil by Yi Kwang-Su 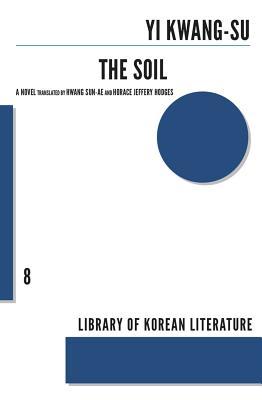 A major, never before translated novel by the author of "Mujong / The Heartless"--often called the first modern Korean novel--"The Soil" tells the story of an idealist dedicating his life to helping the inhabitants of the rural community in which he was raised. Striving to influence the poor farmers of the time to improve their lots, become self-reliant, and thus indirectly change the reality of colonial life on the Korean peninsula, "The Soil" was vitally important to the social movements of the time, echoing the effects and reception of such English-language novels as Upton Sinclair's "The Jungle."

The main characters include Heo Sung, a young and idealistic young man who comes from the country and succeeds at being a lawyer but feels he must go back home to serve his community. Heo Sung is strict, moral, human and forgiving, but he also doesn't seem to be very flexible in a lot of ways, and he doesn't seem to want to understand the people of the city. Yun Jeong-seon is a widow and a city girl who is seen as loose, lacking moral and someone who also doesn't want to help the people in countryside. She is malleable throughout the story and towards the end does see the error of her ways. Other minor characters include a Dr. Lee who came from America and only wants a girl due to how much fortune she has instead of duty and love, there is also Kim Hap-Jin who is licentious and lusts after all sorts of women and heavily resents Heo Sung. There are a lot more, but it would take a long time to list them all.

Its important to support those who aren't as fortunate

The story is written in third person omniscient and the reader sees everyone's thoughts, from the city's inhabitants to the country's inhabitants and so forth. I have to say that if the story is not read frequently, then it will be easy to get lost with the characters and the numerable threads that tie them together because the novel focuses not only on Heo Sung going back to the country and trying to make things right in there as well as his own family, it also focuses on his wife and her issues, and friends and family also have their own problems and are featured in the story. The writing is acessible and once the reader enters into the intimidating tome (512 pages!) and sees the short chapters (longest is about 3 pages) then there is surprise by how quickly the story moves along.

Author Information:
(From back of the book)

Yi Kwang-su was born in 1892 during the twilight years of the Korean monarchy, which ended in 1910 with the annexation of Korea by Japan. Recognized as one of modern Korea's best novelists, especially for his 1917 novel The Heartless, he died in disfavor in 1950, accused of collaboration with the Japanese.

Hwang Sun-Ae and Horace Jeffery Hodges live in Seoul, Korea, and have co-translated several works of Korean literature together. Hwang Sun-Ae has a doctorate in German literature from the University of Munich, and works as a freelance translator. Horace Jeffery Hodges has a doctorate in history from UC Berkeley, and works as a professor at Ewha Womans University and as an editor.

The first thing that attracted me to the book is the title and when it was published. I expected the book to be similar to Pearl Buck's The Good Earth, and it wasn't. Its not a bad thing, because I did enjoy reading the novel and seeing the Korea prior to WWII, prior to Korean War when North and South were forced to separate, and there are a few commonalities between The Soil and The Good Earth, although I feel that it reads a lot like Anna Karenina by Leo Tolstoy. The main reason that it striked me as more like Anna Karenina is the fact that Leo Tolstoy lectured or beat the reader over the head on the right way to conduct life and business, and he compared Levin to people in the city, and Levin clearly shone brightly when being compared to someone like Oblonsky or Vronsky or even Count Karenin. While the farm life in Anna Karenina seemed to be a tad too ideal, Yi Kwang-Su, on the other hand, portrayed the country life as conservative and cruel to farmers, but at the same time there seemed to be simplicity when Heo Sung lived with his wife and a former Gisaeng and they worked for food and were happy that way. Pearl Buck's The Good Earth, was a subtle commentary on the country life versus the life of nobility and unlike Yi Kwang-Su and Leo Tolstoy she allowed the reader to draw their own conclusions, while Yi Kwang-Su literally beat the reader over what to like and what to dislike, which is what I felt Leo Tolstoy had done. (Seriously, no good city people in either The Soil nor Anna Karenina?) But yes, if you want to see Korea when it was whole and united or if you are looking for something similar to Anna Karenina with a not very intimidating size and accessible language, then check out The Soil by Yi Kwang-Su.