G511 Book Review of When a Baby is Born... by Cheng Naishan 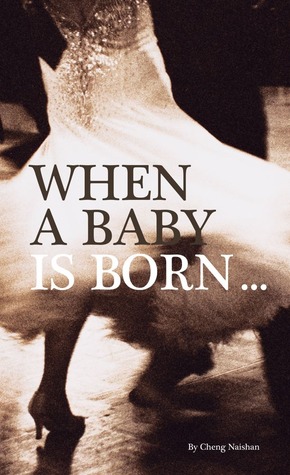 This fascinating novel by one of contemporary China's most prolific writers offers insight into a chaotic period in modern Chinese history.

The early sixties of the last century saw the exodus of Shanghai's educated youth to the wilderness of Northwestern China. They were mainly engaged in farming there, working in appalling conditions. Tang Dawei, a high school student from a wealthy family, volunteers to go in order to flee the merciless criticism and unbearable social pressure that follow an "incident." Dawei settles down in the Gobi Desert, where he goes through countless hardships and ordeals to transform himself into a "tough guy." However, China's open door policy, of the early eighties, brings about dramatic changes in his life. After achieving academic success and professional recognition, he is eventually vindicated.

His dramatic life experience is interwoven with three relationships he gets involved in. The first relationship is with his first love, Xiaomei, who is a pretty but rather dependent girl destined to lead a comfortable but dull life; the second one is with his wife, Spring Flower, who is a peasant girl struggling alongside him with incredible courage, tenacity, and love; and the third one is with Xiao'an, a young engineer who, under his guidance, breaks loose from the shackles imposed on her and embarks on a new independent life.

The main characters include Tang Dawei who, early in life, suffered from abandonment and who voluntarily goes to live and work in Gobi Desert during Cultural Revolution. He is introspective and seems to be a bit closed off on the outside, although on the inside he is a very open and protective indivdual. There is also Xiaomei who happens to be Tang Dawei's first love and who wasn't good at math and sciences. She is also extremely beautiful, pampered and knows very little of what is going on in the world. Spring Flower is Tang Dawei's life and she has lived a very difficult life at the point of willingly depriving herself from feminine beauty and tokens. (Many-a-time Tang Dawei mourns that Spring Flower is past her prime age of using feminine things and showing off her beauty.) But she is very loyal and sticks very close to Tang Dawei. The last woman is Xiao'an who is both beautiful and intelligent as well as extremely optimistic and cheerful, but she also suffers from unrequited love.

Love is beyond beauty

Its written in third person narrative from Tang Dawei's point of view and although a bit straightforward, I did find the time shifting confusing and couldn't understand if the book takes place on the train and its he recalling the details and memories of his life, or if the recall takes place at different times. But yes, the story is more character and psychology driven rather than plot driven and the memories are best described as bittersweet. I do wonder if the story hints at how things were back then for women through these three characters; that Xiaomei is beautiful but not modern nor hardworking, while Spring Flower is modern and hardworking but lacks beauty, and ultimately these two attributes come together in Xiao'an.

Born in 1946 in Shanghai, Chen Naishan majored in English at Shanghai College of Education. She later became a middle school teacher. She started writing in 1979, using Shanghai as teh background for most of her works. Her representative works include The Blue House, Poor Street, and The Banker. Her works have frequently been adapted as television dramas and movies.

Since 1990 the author has divided her time between Shanghai and Hong Kong. She has devoted herself to producing memoirs of modern urban culture in Shanghai over the last few years, publishing a series of Shanghai related books, including, Shanghai Tango, Shanghai Lady, Shanghai Fashion and Shanghai Taste.

This was definitely an interesting read because while there are things that are going on in the story, the primary focus are the characters, or at least one character, that of Tang Dawei who examines three primary relationships he had with three women and how these women differ from one another. I also would like to know who wrote or composed the song When a Baby is born... because I'm curious about listening to it and its referenced quite a few times in the book, but the song represents the change that Tang Dawei's life went through. Its a short book, about 171 pages long, but at the same time its a bit of a philosophical book, especially when it highlights the differences between the Cultural Revolution generation and that of 1980s.

This was given to me by Tuttle for an honest review

4 out of 5
(0: Stay away unless a masochist 1: Good for insomnia 2: Horrible but readable; 3: Readable and quickly forgettable, 4: Good, enjoyable 5: Buy it, keep it and never let it go.)
2010 4 stars Asia/Asian America experience Book Review Cheng Naishan China given by publishing company goodreads