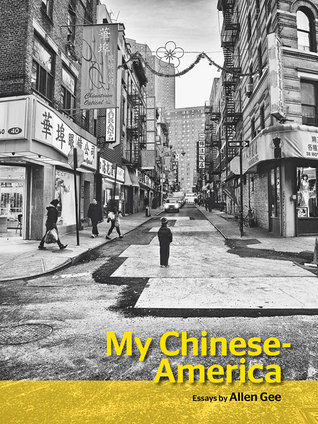 Name of Book: My Chinese-America

Eloquently written essays about aspects of Asian American life comprise this collection that looks at how Asian-Americans view themselves in light of America’s insensitivities, stereotypes, and expectations. My Chinese-America speaks on masculinity, identity, and topics ranging from Jeremy Lin and immigration to profiling and Asian silences. This essays have an intimacy that transcends cultural boundaries, and casts light on a vital part of American culture that surrounds and influences all of us.

About the Author:
(From the inside of the book)

Allen Gee is a graduate of The University of New Hampshire, the Iowa Writers' Workshop, and The University of Houston. He is currently an associate professor of English at Georgia College, where he teaches in the M.F.A. program

The author is asked by his mother to come over for his father's 60th birthday celebration but along the way he gets stopped by a cop who thinks he is carrying drugs when in fact it was fishing equipment.

In Chicago the author is asked by a friend whether or not it is safe in Chinatown, which causes him to recall his own family history that's tied to New York Chinatown.

The author, who was 37, meets a young American woman by name of Niki who wants to go out with him, but the date turns out to be more than he expects.

When the author's daughter was young, he was asked by his wife to go to the store and buy some formula. While there, he runs into trouble which causes him to reminisce about the ideas of Asian masculinity from the time he was a child to the current times.

The author recounts his family history as well as something astounding that he learns about his own father.

Written in some sort of newspaper style and it relates a story of how he attempted to learn sports while at the same time he begins to compare and talk about Jeremy Lin.

7. Asians in the library

Basically the author analyzes and speaks about the Alexandra Wallace video as well as Jimmy Wong's video of a song that satirizes Alexandra's speech.

The author and his wife move into Georgia to be near the wife's family and the author recounts his positive and negative views of living in the South.

While on the hike the author feels his heart is beating too fast thus he goes to the hospital to find out what is wrong.

The author goes on a deep sea fishing at Basseterre and recounts the adventures and sights as well as the people he meets while being on the boat.

11. My Chinese-America: A Meditation on Mobility

The author describes personal experiences he has in each of the fifty states: from Alabama to Wyoming.

The author really knows how to write essays of very high caliber that make one look at the world differently than before, which I've enjoyed doing. This is definitely a book of essays that people of color will be able to relate to. As shocking as it sounds, the world isn't as perfect as most people hope it would be, and what is no longer overt became covert. While the stories deal with themes of family as well as society, there are a few that get tied to the factor of race and where race and being Asian-American played a very big role in author's learning experiences.