G683 Book Review of The Renegade Queen by Eva Flynn 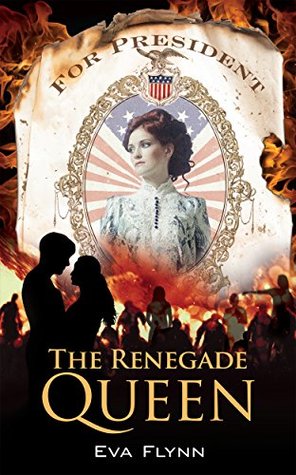 Name of Book: The Renegade Queen

Two Renegades So Controversial They Were Erased From History Discarded by society, she led a social revolution. Disgusted by war, he sought a new world.
She was the first women to run for President, campaigning before women could vote.

He was the Hero of Vicksburg, disillusioned with the government after witnessing the devastating carnage of the Civil War.

Their social revolution attracted the unwanted who were left out of the new wealth: the freed slaves, the new immigrants, and women.

This is the true story of Victoria Woodhull and the love of her life, James Blood.

Adored by the poor, hated by the powerful, forced into hiding during their lifetimes and erased from history after death, the legend of their love lives on.

It’s 1869 and Victoria has a choice to make. She can stay in an abusive marriage and continue to work as a psychic, or she can take the offer of support from handsome Civil War general James Blood and set about to turn society upside down. Victoria chooses revolution.

But revolutions are expensive, and Victoria needs money. James introduces Victoria to one of the wealthiest man in America”"Commodore Vanderbilt. Along with her loose and scandalous sister, Tennessee, Victoria manipulates Vanderbilt and together they conspire to crash the stock market”"and profit from it. Victoria then parlays her fortune into the first female-owned brokerage firm.

When her idol Susan B. Anthony publishes scandalous rumors about Victoria’s past, Victoria enters into a fierce rivalry with Susan to control the women’s movement. James supports Victoria's efforts despite his deep fears that she may lose more than the battle. She might lose part of herself.

Victoria starts her own newspaper, testifies to Congress, and even announces her candidacy for President. But when Victoria adopts James's radical ideas and free love beliefs, she ignites new, bruising, battles with Susan B. Anthony and the powerful Reverend Henry Beecher. These skirmishes turn into an all-out war, with Victoria facing prejudice, prosecution, and imprisonment. Ultimately, Victoria and James face the hardest choice of all: the choice between their country and their love.

The main characters include Victoria Woodhull who comes from a household that exploits her talent and that also abuses her in numerous ways from physical to verbal and to sexual. At a young age Victoria wants to get away. In later years I can describe her as an incredibly strong woman who doesn't let adversity change her mind or affect her behavior. She is loyal, extremely determined and doesn't care what others think of her, and she is also very intelligent and doesn't give up. Tennessee is Victoria's younger sister who is also loyal and uses her body to help out the cause her sister is fighting for. James Blood is Victoria's paramour and will do whatever he can for Victoria. He is also very unconventional and it seems as if very little bothers him. Canning is Victoria's first husband who is portrayed in bad and good strokes. He is a doctor who is addicted to sex and various narcotics. He also seems to be cold one minute then hot the next minute.

Its always possible to rise to the highest tier of society.

The story is from first person narrative, from Victoria's point of view and the story is from the time she is a young girl to the time she is forced to make a very difficult decision in 1872. Unfortunately the picture of Victoria's early years are a bit scant in my opinion, and I think I would have liked a bit more childhood vignettes. The later years, however, are more fleshed out and one can see Victoria becoming more sure and confident of herself through various adversity and hardship. The story is also linear, from 1838 up until 1872, which means no alternative voice or narrative takes away from Victoria's voice.

Eva was raised on bedtime stories of feminists (the tooth fairy even brought Susan B. Anthony dollars) and daytime lessons on American politics. On one fateful day years ago when knowledge was found on bound paper, she discovered two paragraphs about Victoria Woodhull in the WXYZ volume of the World Book Encyclopedia. When she realized that neither of her brilliant parents (a conservative political science professor and a liberal feminist) had never heard of her, it was the beginning of a lifelong fascination not only with Victoria Woodhull but in discovering the stories that the history books do not tell. Brave battles fought, new worlds sought, loves lost all in the name of some future glory have led her to spend years researching the period of Reconstruction. Her first book, The Renegade Queen , explores the forgotten trailblazer Victoria Woodhull and her rivalry with Susan B. Anthony.

Eva was born and raised in Tennessee, earned her B.A. in Political Science from DePauw in Greencastle, Indiana and still lives in Indiana. Eva enjoys reading, classic movies, and travelling. She loves to hear from readers, you may reach her at eva@rebellioustimes.com, and follow her on Goodreads and Twitter.

And here I thought I knew a lot about mid 19th century in America through reading fiction, but apparently there is always something new to learn no matter if one is a novice, an amateur or an expert in a subject matter. Its an entertaining read of the ever first female to run for president, more than a hundred years before Hillary Clinton made those steps in 2016. Who is the mysterious woman to run as the first female president? Victoria Woodhull, about whom little to nothing is known due to detractors not paying attention or acknowledging her contributions, and completely erasing her out of history. Also as well, the name Harriet Beecher Stowe should be very familiar to both young and old as a woman who wrote Uncle Tom's Cabin that had a huge impact on going to war, but I knew absolutely nothing about her family or where she came from, and this book does talk about Harriet Beecher Stowe's family, in particular her mother and brother. If the reader is seeking a book that is about the first woman to run for president or to get to know the unique time as well as concept, then this is a right book to read and enjoy.

4 out of 5
(0: Stay away unless a masochist 1: Good for insomnia 2: Horrible but readable; 3: Readable and quickly forgettable, 4: Good, enjoyable 5: Buy it, keep it and never let it go.)
2016 4 stars Book Review book tour Eva Flynn goodreads Paper Form