G690 Book Review of Taming the Twisted by Jodie Toohey 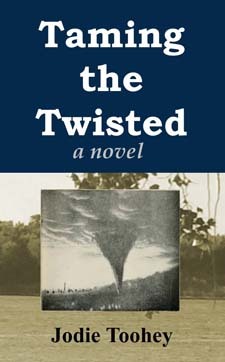 Name of Book: Taming the Twisted

"Taming the Twisted" is written in a similar style to Laura Ingalls Wilder's "Little House" books though updated for modern times. It might read as if she'd left in all of the juicy tidbits about things people didn't talk about during the time when she was writing. "Taming the Twisted" is a story of destruction, romance, mystery, and deceit set against a back drop of an actual historical event.

In early June, 1860, Abigail enjoyed a peaceful home life with her parents, younger sister, and twin toddler brothers. Their home in Camanche, Iowa, where they’d emigrated from Pennsylvania, was almost complete and her beau, Joseph Sund, had recently proposed marriage.

That changes the evening of June 3rd when a tornado rips through town, killing her parents. At the mass funeral for the over two dozen people who perished in the storm, she learns Marty Cranson, with whom Abigail witnessed Joseph having a heated argument, died, but at the hands of a person rather than the tornado.

In addition to being faced with raising her young siblings, Joseph has disappeared without a trace and a stranger, Marshall Stevenson, appears, offering to help Abigail repair the families’ home and cultivate the newly planted farm crops.

Abigail, while developing romantic feelings for Marshall, tolerating the scorn of town woman Pamela Mackenrow, and working as a seamstress and storekeeper to support her siblings, becomes obsessed with finding out who killed Marty, hoping that and not that he no longer loved her, was the reason Joseph left without saying goodbye.

Main characters include Abigail, a young woman who at beginning is happy with loving parents, younger sister and brothers and who also is about to begin a new life with fiance. There is also Joseph who happens to be Abigail's fiance but then due to mysterious circumstances seems to vanish overnight without a word to anyone. Marshall Stevenson is another young man that Abigail and her siblings rescue and take care of, and in return he becomes a surrogate father towards the siblings. Alice, Samuel and David are Abigail's younger siblings, and while Samuel and David are allowed to enjoy childhood, a lot of responsibilities fall on Alice's shoulders. There is also another woman named Pamela who seems to really dislike Abigail and who has her own secrets.

Sometimes there aren't answers to questions

The story is in third person narrative from Abigail's point of view. While the author has clearly done research in constructing the tale and creating admirable characters in both men and women, I do feel that there seemed to be something missing within the scenes, that while they tried to be similar to Little House series, there wasn't a spark that Little House series had. I also did try to understand the mystery that was going on, but I think I felt it was a little bit too long.

Jodie Toohey is the author of four additional books, two poetry collections – Crush and Other Love Poems for Girls (2008) and Other Side of Crazy (918studio, 2013) – as well as two novels, Missing Emily: Croatian Life Letters (2012) and Melody Madson – May It Please the Court? (2014).
When Jodie is not writing poetry or fiction, she is helping authors, soon-to-be-authors, and want-to-be authors from pre-idea to reader through her company, Wordsy Woman Author Services.

While it did take me awhile to get into the story, and when I did, I found it an enjoyable and interesting read that is clearly written by someone who is passionate about history, although I do feel that the author needs a little bit practice in livening the story. Something that sold me on reading this book is the fact that this book focuses on things that Little House series never did, or something along the lines. Some parts are true because Little House series never focused or advocated being part of community, at least in my memories Little House characters were portrayed as independent people and who only got help when necessary and when it was needed. While a few things that the story does go into wouldn't be considered scandalous by modern generations (namely a man and a woman living together on one property) but I have to remember that way back then something that is trivial for modern times would be equated to pornography back then. Kind of shocking to realize how desensitized I seemed to become.

4 out of 5
(0: Stay away unless a masochist 1: Good for insomnia 2: Horrible but readable; 3: Readable and quickly forgettable, 4: Good, enjoyable 5: Buy it, keep it and never let it go.)
2015 4 stars Book Review book tour goodreads Jodie Toohey Paper Form