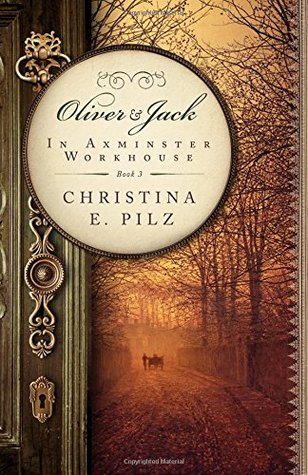 Name of Book: Oliver and Jack in Axminster Workhouse

In Victorian England, 1846, an ex-apprentice and his street-thief companion are confined inside a workhouse to await trial for a crime they did not commit.

After the seaside interlude in Lyme Regis, Oliver and Jack are arrested and sent to Axminster Workhouse to await trial for the theft of books that they only meant to borrow.

They are put in the less-than-tender care of Workmaster Chalenheim, who controls the quotas they must fill, the amount of food they are allowed to eat, and the punishments they must endure upon breaking the rules, however arbitrary.

Oliver struggles with the shame of being in a place he thought he'd left behind him long ago, and also with the contrast between the life he once enjoyed and the hunger and degradation inside the workhouse walls. Meanwhile, Jack is confronted by a predator who tests the limits of Jack's endurance and the strength of his love for Oliver.

Together they must find a way to escape the workhouse before they succumb to the harsh conditions or are separated by the hangman's noose, whichever comes first.

Main characters of the story were Jack and Oliver. Jack is best described as an eternal optimist who will do whatever he can for Oliver, even if its something he doesn't want to do. He is also good at blending in with others and coming up with last minute adjustments. Oliver was previously a gentleman who had a very difficult childhood (For that, go back to Charles Dickens' Oliver Twist) and he is more hidden and tends to be very serious minded as well as extremely proper. He is talented in coming up with creative solutions and his only desire is to open up a bookshop. In the workhouse he is trying to confront the trauma he experienced as a child and often has a big heart towards those who are in need. One another character that played an important role in the story is Workmaster Chalenheim who is very corrupt, greedy, manipulative and will use whatever means he can to get what he wants.

In order to love one must open themselves to becoming vulnerable

The story is in third person narrative from Jack's and Oliver's points of view. The author does let the reader know who is speaking and she does adjust the language slightly, namely that if Jack is speaking, he calls Oliver "Nolly." What is impressive is how she draws the reader into the story and how often I lost track of pages that I was reading. I also enjoyed how the relationship between Jack and Oliver continues to blossom and how the characters continue to grow and to adjust to one another. Christina was born in Waco, Texas in 1962. After living on a variety of air force bases, in 1972 her Dad retired and the family moved to Boulder, Colorado. There amidst the clear, dry air of the high plains, as the moss started to grow beneath her feet, her love for historical fiction began with a classroom reading of Little House on the Prairie by Laura Ingalls Wilder.
She attended a variety of community colleges (Tacoma Community College) and state universities (UNC-Greeley, CU-Boulder, CU-Denver), and finally found her career in technical writing, which, between layoffs, she has been doing for 18 years. During that time, her love for historical fiction and old-fashioned objects, ideas, and eras has never waned.
In addition to writing, her interests include road trips around the U.S. and frequent flights to England, where she eats fish and chips, drinks hard cider, and listens to the voices in the pub around her. She also loves coffee shops, mountain sunsets, prairie storms, and the smell of lavender. She is a staunch supporter of the Oxford comma.

May I say that I really like the book cover? It feels whimsical and at the same time there is a hint of darkness within the picture. The story immediately picks up from where Oliver and Jack At Lodgings in Lyme picks up, where they get arrested for "stealing" books and as a punishment they get sent to work at a workhouse. While I haven't read the first book-Fagin's Boy-yet, I do feel that for more enjoyment both books should be read. Some of the characters that are talked of in this book aren't given a lot of background, namely the characters in the previous book, which rather means this isn't a stand-alone book. The story itself isn't action oriented but instead is best described as exploratory and psychological when it comes to both Jack and Oliver. And also as well, the story does feature homosexual characters and explores the love they have for one another, and in addition to that, the reader has a chance to go back and experience the Victorian Era before reforms and modernity take over.

4 out of 5
(0: Stay away unless a masochist 1: Good for insomnia 2: Horrible but readable; 3: Readable and quickly forgettable, 4: Good, enjoyable 5: Buy it, keep it and never let it go.)
2015 4 stars Book Review book tour Christina E Pilz goodreads Paper Form