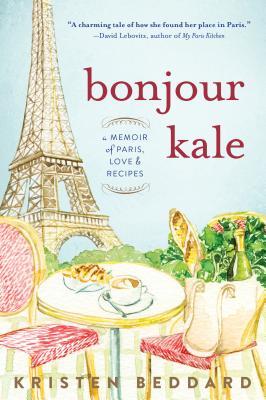 Title of the book: Bonjour Kale; a Memoir of Paris, Love & Recipes

A memoir of love, life, and recipes from the woman who brought kale to the City of Light

The story of how one expat woman left her beloved behind when she moved to France-her beloved kale, that is. Unable to find le chou kale anywhere upon moving to the City of Light with her new husband, and despite not really speaking French, Kristen Beddard launched a crusade to single-handedly bring kale to the country of croissants and cheese. Infused with Kristen's recipes and some from French chefs, big and small (including Michelin star chef Alain Passard) Bonjour Kale is a humorous, heartfelt memoir of how Kristen, kale, and France collide.

Kristen Beddard
is the American author of
Bonjour Kale: A Memoir of Paris, Love and Recipes
and a contributing author to We Love Kale.
She is the founder of The Kale Project,
a blog and successful initiative
that reintroduced kale to France
and was featured in The New York Times,
Conde Nast Traveler, Self Magazine and more.
She has a certificate in Culinary Nutrition
from the Natural Gourmet Institute
and is currently working on a new book Roots, Shoots and Stalks
about food waste and cooking with the whole vegetable.
She resides in New York City with her husband and daughter.

Buy the book: on Amazon | on Barnes & Noble

Where I live, I imagine that finding cuisine or specific type of food is as easy as one-two-three. I even take it for granted that if I desire to find a specific type meat or tea, I can easily drive to an ethnic market and buy it there, thus its difficult for me to imagine that prior to 2017, France didn't have any kale. Unlike the author, I only knew kale because it became popular recently and even then I just knew the name; I didn't know it was a cabbage (there are things I don't know) and I also had no idea that kale was so well known prior to 2017. Back to the book, the author has done an amazing job researching things about kale and introducing it to those who are new to the craze as well as making it an exciting fish out of water story about a young woman who has moved to France and the daily struggles she experiences while living life there be it returning things, language barriers or learning the norms of France.

4 out of 5
(0: Stay away unless a masochist 1: Good for insomnia 2: Horrible but readable; 3: Readable and quickly forgettable, 4: Good, enjoyable 5: Buy it, keep it and never let it go.)
2016 4 stars Book Review book tour goodreads Kristen Beddard Non-fiction Paper Form