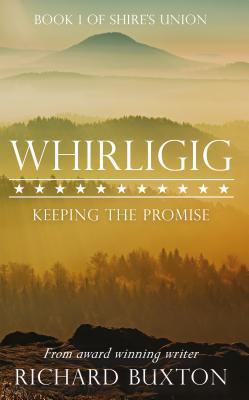 Shire leaves his home and his life in Victorian England for the sake of a childhood promise, a promise that pulls him into the bleeding heart of the American Civil War. Lost in the bloody battlefields of the West, he discovers a second home for his loyalty.


Clara believes she has escaped from a predictable future of obligation and privilege, but her new life in the Appalachian Hills of Tennessee is decaying around her. In the mansion of Comrie, long hidden secrets are being slowly exhumed by a war that creeps ever closer.


The first novel from multi-award winning short-story writer Richard Buxton, Whirligig is at once an outsider’s odyssey through the battle for Tennessee, a touching story of impossible love, and a portrait of America at war with itself. Self-interest and conflict, betrayal and passion, all fuse into a fateful climax.

Main characters in the book include Shire, an Englishman and a schoolmaster's son who seems to harbor a crush on Clara and who has made promise to her. He seems to elevate Clara's memories and will do whatever he can for her. Clara is Shire's crush and is in upper class. She moves to America and gets married to a distant cousin Taylor and tries her best to fit into the southern society. (Unfortunately she is not as well drawn as I hoped.) She also is resourceful and a quick learner. Taylor is Clara's husband and eventually becomes Shire's adversary. Taylor has had a tragic upbringing in terms of childhood and he is best described as extremely cruel and warped. Other secondary characters include Taylor's mother, then there is Shire's friend Tuck who had his own secrets and few other people in the army as well as Taylor's slaves.

War is a messy business

The story is in third person narrative from what seems to be everyone's point of view, from Shire to Clara and so forth. I felt overwhelmed when it came to remembering characters because there are a lot of them in the book, and my lack of knowledge when it came to military aspects didn't help either, although the author has done his best with that.

Richard lives with his family in the South Downs, Sussex, England. He completed an MA in Creative Writing at Chichester University in 2014. He has an abiding relationship with America, having studied at Syracuse University, New York State, in the late eighties. His short stories have won the Exeter Story Prize, the Bedford International Writing Competition and the Nivalis Short Story Award. Whirligig is his first novel and the opening book of Shire’s Union trilogy. Current projects include the second book, The Copper Road, as well as preparing to publish a collection of short stories.

For some odd reason, I though that the book would be similar to Gone with the Wind, at least in terms of showing the civilian life of civil war. However, that wasn't the case. I also gathered that the focus would be a lot more on love story between Shire and Clara, and while that was some of the case, it was only a small part of the novel. Most of the novel was focused on battles and on daily life in the army whether it has ugly or beautiful moments. What I found myself liking about the book is that the American civil war is shown from a foreigner's point of view, and someone who has fought for the union rather than the south. I also liked a little on how it filled some blanks when it came to Gone with the Wind (in particular the discussion Scarlett and Rhett had about England and whether or not it will help the South.) I applaud the author for trying to create a messy and realistic picture of the war, and I do wish that I could have better understood the military terms and what was going on because the military aspects of the book really went over my head, unfortunately.

Friday, July 14
Feature at Passages to the Past

Thursday, July 20
Review at Historical Fiction Obsession
Feature at What Is That Book About

Thursday, July 27
Review at Back Porchervations

4 out of 5
(0: Stay away unless a masochist 1: Good for insomnia 2: Horrible but readable; 3: Readable and quickly forgettable, 4: Good, enjoyable 5: Buy it, keep it and never let it go.)
2017 4 stars Book Review book tour goodreads No longer owned Paper Form Richard Buxton