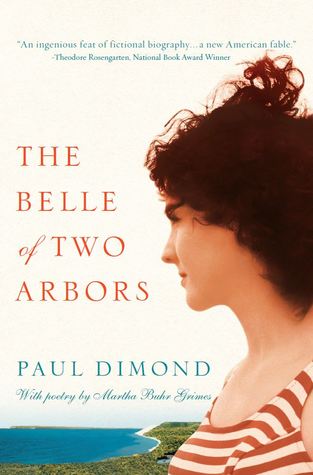 Name of Book: The Belle of Two Arbors

Born at the turn of the twentieth century in Glen Arbor, near the dunes of Northern Michigan, young Belle is the first child of a gruff stove-works boss and a crippled mother who weaned Belle on the verse of Emily Dickinson. When a natural disaster results in her mother's death and nearly takes the life of her younger brother Pip, Belle creates a fierce, almost ecstatic farewell song. Thus begins her journey to compose a perfect Goodbye to Mama.

At 21, Belle ventures south to Ann Arbor for university, with teenaged Pip in tow. There, she befriends Robert Frost, Ted Roethke and Wystan Auden and finds that her poetry stands alongside theirs, and even with that of her hero, Dickinson. Her lyrics capture the sounds, sights, and rhythms of the changing seasons in the northern forests, amidst the rolling dunes by the shores of the Great Lake.

Despite the peace she finds, Belle also struggles in both homes. Up north, she battles her father who thinks a woman can't run the family business; and clashes against developers who would scar the natural landscape. In Ann Arbor, she challenges the status quo of academic pedants and chauvinists.

Belle's narrative brings these two places to life in their historic context: a growing Midwestern town driven by a public university, striving for greatness; and a rural peninsula seeking prosperity while preserving its natural heritage. Through the Roaring Twenties, the Great Depression, World War II, and the Post-War Boom, Belle's story is hard to put down. Her voice and songs will be even harder to forget.

There are a lot of characters in the story, but my favorite ones include Belle, Pip, David Ahgosa, Mirja and Rabbie along with Ted Roethke, Robert Frost and Auden. To me Belle is an amazing woman because she feels so human and real, tough and vulnerable and filled with contradictions. Belle's psychology isn't explained nor is it dwelled on in the story. Belle seems to accept herself as she is, warts and all. Belle is also both a businesswoman and a poet and although not a recluse, she seems to be wary and uncertain of fame and of having a husband, although she is provided multiple chances to go that route. Pip, Belle's younger brother, is an inventor and seems to seek out beginning of the universe. He is devoted and loyal to Belle, a genius and also seems to have issues with romantic commitment. (It's a bit hard to differentiate characters from the settings in this case for me.) The characters of Ruthie and Paul are not as well done as Belle and others, unfortunately, and some of the things Ruthie talked about in the last two chapters seemed so different from what Belle saw.

There is a lot to language and poetry

The story is written in first person narrative from Belle's point of view, and the last two chapters are written from Ruthie's point of view also in first person narrative. This is not a story to be rushed through but instead its a rare story to savor and enjoy and also a story that calls for multiple readings to truly understand it. This story is best saved up for long wintry evenings when the reader has plenty of time to indulge in poetry. While Belle and fictional and non-fictional characters are truly gems to savor and enjoy, I really feel that other characters such as Ruthie, Angel, Davey and Paul aren't as well drawn as I had hoped, and the last two chapters written from Ruthie's point of view, to me, seem to be unnecessary to the story. I also loved how the author demonstrated that a woman does not need a man to be happy; Belle is happy in her life and rarely expresses discontent that she is without someone special.

Author Information:
(From the book)

Paul Dimond grew up in Ann Arbor with one fott between Twon and Gown and the other in Glen Arbor exploring northern Michigan's Sleeping Bear Dunes. At Amherst College he majored in history researching original sources. He retunred to Michigan Law School where he began his study of the Civil War Amendments.

In 1970s Paul helped try several cases to secure the right to educations for all kids no matter how disabled and four landmark race cases taht challenged a divided Supreme Court. In the 1980s he continued to study the Fourteenth Amendment, the proper role of judicial review and the dynamics of metropolitan areas. All culminated in his service as Special Assistant to President Clinton for Economic Policy in the 1990s. Safely back in his two Arbors, he chaired a national real estate firm, practiced law and now serves as a trustee or advisor for many organizations to help Michigan reclaim its destiny at the heart of the Great Lakes and a thriving home for fresh water and fresh ideas.

Paul is the authro fo numerous articles and three books on policy, law and history., including Beyond Busing, winner of the Ralph J. BUnche Book fo the Year Award (1986) with a new afterword for a 20th anniversary reprinting in paperback. Dissatisfied with any of the endings, he turned to fiction. His first novel, North COast Almanac for young teens was published in 2012. Upcoming works inlcude a political thriller, Succession at the WHite House, and a journey love story, Widower's Song.

After nearly a decade of research and drafting, his historical novel, The Belle of Two Arbors 1913-1953, will be published in March 2017 for all to read.

One of my great literary loves is The Tale of Genji by Murasaki Shikibu, which I often mention pretty much in a lot of book reviews, thus I hope I am doing the story an honor by comparing it to my favorite story. To me its interesting that in a lot of ways The Belle of Two Arbors and The Tale of Genji are quite different yet there are similarities as well. Both of the books have poetry; they both deal with multiple generations of the same family, for perhaps ninety eight percent of the story, neither character ventures far from home, and both stories deal with lifespans from childhood to death. Also, The Belle of Two Arbors seems to be deliberately different from Tale of Genji because while Genji concerned himself with romance and love and there was very little to no focus on career, Belle seems to take opposite approach and while Genji has left descendants, Belle didn't. I also want to commend the author for writing an amazing, beleivable and vulnerable heroine. I honestly can't wait to go back to The Belle of Two Arbors and savor the story again.

4 out of 5
(0: Stay away unless a masochist 1: Good for insomnia 2: Horrible but readable; 3: Readable and quickly forgettable, 4: Good, enjoyable 5: Buy it, keep it and never let it go.)
2017 4 stars Book Review book tour goodreads Paper Form Paul Dimond