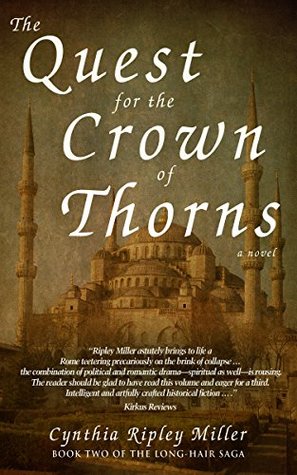 Name of Book: The Quest for the Crown of Thorns

Part of a Series: The Long Haired Saga

AD 454. Three years after the Roman victory over Attila the Hun at Catalaunum, Arria Felix and Garic the Frank are married and enjoying life on Garic's farm in northern Gaul (France). Their happy life is interrupted, when a cryptic message arrives from Rome, calling Arria home to her father, the esteemed Senator Felix. At Arria's insistence, but against Garic's better judgment, they leave at once.

Upon their arrival at Villa Solis, they are confronted with a brutal murder and the dangerous mission that awaits them. The fate of a profound and sacred object--Christ's Crown of Thorns--rests in their hands. They must carry the holy relic to the safety of Constantinople, away from a corrupt emperor and old enemies determined to steal it for their own gain.

But an even greater force arises to derail their quest--a secret cult willing to commit any atrocity to capture the Crown of Thorns. And all the while, the gruesome murder and the conspiracy behind it haunt Arria's thoughts.

Arria and Garic's marital bonds are tested but forged as they partner together to fulfill one of history's most challenging missions, The Quest for the Crown of Thorns.

While I liked Arria and Garric, the main characters of the novel, part of me felt as if beyond a certain image I wasn't able to see them as full fledged humans. I did enjoy the relationship they had with one another and how they acted as a team in all decisions they had made. I also loved how they conferred with one another from small things to big things. Those two definitely had extremely strong and loving relationship. The character that perhaps interested me the most is Marcella, a young and conflicted half-sister to Arria. Its hard to see Marcella as completely evil because there is a lot of complexity to her character and her decisions. One becomes even curious about why she became the way she did. Other characters such as Drusus or even Marcella's mother seemed to be more clear cut rather than gray as Marcella was. I do hope to see more of Marcella in the future installments and I hope that my hunch about where the author will take her character to will prove to be correct.

What goes around comes around

The story is in third person narrative from multiple characters' points of view. I do feel that one does need to read the previous book of the series, On the Edge of Sunrise because some scenes do not have same impact without the knowledge from the previous book, I imagine. Aside from that, very well written and researched and something that I might recommend for people who are starting out with historical fiction but find some books too intimidating. The detail that went into the story is amazing, from the food that was cooked and eaten to the herbs to travel and to religion as well. While there are christian elements, I am happy to say that the story does not preach conversion.

Cynthia Ripley Miller is a first generation Italian-American writer with a love for history, languages and books. She has lived, worked, and travelled in Europe, Africa, North America and the Caribbean. As a girl, she often wondered what it would be like to journey through time (she still does), yet knew, it could only be through the imagination and words of writers and their stories. Today, she writes to bring the past to life.

She holds two degrees and has taught history and teaches English. Her short fiction has appeared in the anthology Summer Tapestry, at Orchard Press Mysteries.com and The Scriptor. A Chanticleer International Chatelaine Award finalist for her novel, On the Edge of Sunrise, she has reviewed for UNRV Roman History, and blogs at Historical Happenings and Oddities: A Distant Focus

Cynthia has four children and lives with her husband, twin cats, Romulus and Remus, and Jessie, a German Shepherd, in a suburb of Chicago.

On the Edge of Sunrise is the first in the Long-Hair Saga; a series set in late ancient Rome and France and published by Knox Robinson Publishing. The second book in the series, The Quest for the Crown of Thorns, was released in June 2017.

The author is comfortable in the novel and very careful details are laid out. If there was something that she took liberty with, its very difficult to tell. I also am not sure how to classify the novel because its part romance part mystery/thriller yet its historical fiction at its finest. (That's it, I need to read the prequel to the book now. And yes, I am hoping the third book of the series will come out soon.) I am eager to see what will happen to both heroes and the villains of the stories. I also loved seeing the cusp of medieval ages begin to make appearance. In an odd way as well, this book was sort of a sequel to another book I was reading at the same time; Twilight Empress by Faith L Justice (Review to come soon!) While the story does stand on its own, the juicy bits that are included about the characters really make the prequel too tempting to pass up.

Monday, October 9
Review at Svetlana’s Reads and Views
Feature at Passages to the Past

Thursday, October 12
Review at What Cathy Read Next

4 out of 5
(0: Stay away unless a masochist 1: Good for insomnia 2: Horrible but readable; 3: Readable and quickly forgettable, 4: Good, enjoyable 5: Buy it, keep it and never let it go.)
2017 4 stars Book Review book tour Cynthia Ripley Miller goodreads Paper Form