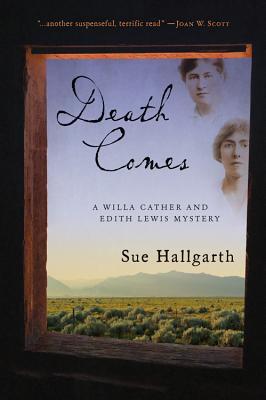 Following On the Rocks, Sue Hallgarth's first Willa Cather and Edith Lewis mystery, ''Death Comes'' gives us another glimpse into the life and work of the Pulitzer-Prize winning novelist Willa Cather and her talented life partner. The year is 1926. Willa and Edith return to Mabel Dodge Luhans pink adobe in Taos, New Mexico. Willa is writing ''Death Comes for the Archbishop.'' Edith is sketching Taos pueblo and hoping for a visit to the nearby D.H. Lawrence ranch. The previous summer they had stumbled on a woman's body. Now the headless bodies of two women add to the mystery. Sue Hallgarth presents an intimate portrait of Cather, Lewis, the spectacular New Mexico landscape, and the famous artists and writers Mabel Dodge Luhan gathered in Taos.

I admit that the book had quite a lot of characters, and unfortunately I can't recall all of them, although I will try to mention what I believe are the main characters. Edith Lewis and Willa Cather are the main characters, one an illustrator I believe while the other is the famous author. They have an easy companionship with one another and both understand one another. There is also Mabel Dodge Luhan who is best known for her scandalous life and history as well as her marriage to Tony Luhan, a Pueblo Native American. There is also Spud who is sort of an editor? for Mabel and who has his own magazine and Adam who goes out to check out what's going on with D.H Lawrence raunch and comes upon across Maria who has gone through her own horrors.

One never knows how things will tie up together

The story is in third person narrative from Edith's as well as some male characters' points of view. While I enjoyed the scenery and learning more about the American artist scene as opposed to the famous Parisian one of F. Scott Fitzgerald and Ernest Hemingway, I found the many names and characters to be a bit overwhelming.

Sue Hallgarth is a former English professor. She has written scholarly articles on Willa Cather and Edith Lewis, and this is her second book of fiction featuring the two of them. Her first book in the series is On the Rocks, set in 1929 on the island of Grand Manan in New Brunwick, Canada. She lives in Corrales, NM.

A lot of mysteries I've read previously seem to be a bit straightforward in their purpose. This story, however, calls for a reader to be involved in more than just figuring out who done it. The author really focuses on the details and lives of the characters as well as setting up New Mexico of the 1920s. This is not a mystery to rush through but instead its something to sit down and go through slowly because the story engages the five senses and provides a lot of knowledge and research of Taos, New Mexico. In fact, mystery is more secondary than the main plot.

4 out of 5
(0: Stay away unless a masochist 1: Good for insomnia 2: Horrible but readable; 3: Readable and quickly forgettable, 4: Good, enjoyable 5: Buy it, keep it and never let it go.)
2017 4 stars Book Review book tour goodreads Paper Form Sue Hallgarth