GG44.The Last Outlaws: The Lives and Legends of Butch Cassidy and the Sundance Kid 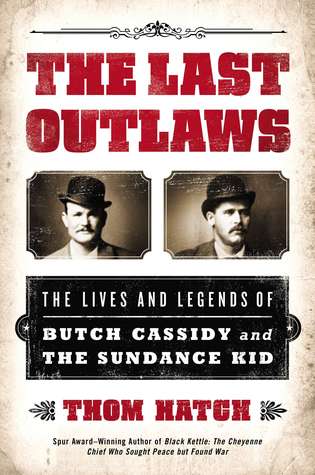 Title of the book: The last outlaws; the lives and legends of Butch Cassidy and The Sundance Kid

The Old West was coming to an end.Two legendary outlaws refused to go with it.

Butch Cassidy and the Sundance Kid—as leaders of the Wild Bunch, they planned and executed the most daring bank and train robberies of the day, with a professionalism never before seen by authorities. For several years at the end of the 1890s, the two friends, along with a revolving cast who made up their band of thieves, eluded local law enforcement and bounty hunters, all while stealing from the rich bankers and eastern railroad corporations who exploited western land. The close calls were many, but Butch and Sundance always managed to escape to rob again another day—that is, until they rode headlong into the 20th century.

Fenced-in range, telephone lines, electric lights, and new crime-fighting techniques were quickly rendering obsolete the outlaws of the wide open frontier. Knowing their time was up, Butch and Sundance, along with a mysterious beauty named Etta Place, headed to South America, vowing to leave their criminal careers behind. But riding the trails of Chile, Argentina and Bolivia, Butch and Sundance would find that crime wasn’t through with them just yet.

In The Last Outlaws, Thom Hatch brings these memorable characters to life like never before: Butch, the brains of the outfit; Sundance, the man of action; and the men on both sides of the law whom they fought with and against. From their early holdup attempts to that fateful day in Bolivia, author Thom hatch draws on a wealth of fresh research to go beyond the myth and provide a compelling new look at these legends of the Wild West.

Just the names themselves should be screaming excitement, cowboys, wild West and so forth. Yet, I was very disappointed with this book. I didnt expect for the book to be a dime novel full of improbabilities that should stretch imagination as far as possible, but i did expect it to be humane and fascinating. I expected to learn a lot from reading it, but again, on all counts the book disappointed me. The author seemed to be afraid to take advantage of stepping out of the documents and it seems as if he is certain of nothing, which is disappointing. I read a few biographies, and one lesson I learned is that it's ok to take some liberties with story to make it interesting, or at least to give your own spin to the legends. For example, I read a tale about CALIGULA, and while he depends a lot on negative resources, the author went above and beyond in making CALIGULA one of the more fascinating and misunderstood emperors of Rome. This was not the case here.

I won this from goodreads giveaway

1 out of 5
(0: Stay away unless a masochist 1: Good for insomnia 2: Horrible but readable; 3: Readable and quickly forgettable, 4: Good, enjoyable 5: Buy it, keep it and never let it go.)
1 stars 2013 Book Review goodreads No longer owned Non-fiction Paper Form Thom Hatch win