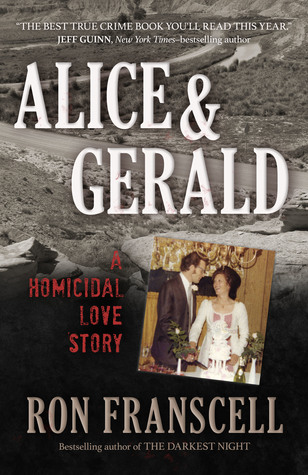 Title of the book: Alice and Gerald: a homicidal love story

True-crime master Ron Franscell tells the grisly story of a cold case involving multiple murders committed by a husband-and-wife team. The appalling details are made even more vivid by the author's familiarity with the Wyoming times and places that formed the backdrop of his national bestseller The Darkest Night.

Would you kill for love?

After Alice, a desperate young mother in a gritty Wyoming boomtown, kills her husband in 1974 and dumps his body where it will never be found, she slips away and starts a new life with a new love. But when her new love's ex-wife and two kids start demanding more of him, Alice delivers an ultimatum: Fix the problem or lose her forever. With Alice's help, he "fixes" the problem in an extraordinarily ghastly way ... and they live happily ever after. That is, until 2013, almost forty years later, when somebody finds a dead man's skeleton in a place where Alice thought he'd never be found.

Author Info:
(From back of the book)

Ron Frascell is the acclaimed author of numerous books,. including both fiction and non-fiction. His true crime work, MORGUE: A LIFE IN DEATH (co author with rnowkned medical examiner Dr. VIncient Di Maio) was a 2017 Edgar Award finalist; his debut novel ANGEL FIRE was listed by the San Francisco Chronicle among the 100 best novels of the 20th century west. During thirty years as a newspaper journalist, Franscell won many national awards, including the prestigious national Freedom of Information Award by Associated Press Managing Editors, and a Best of the West Award from Investigative Reporters and Editors (IRE). He is native of Casper, Wyoming and lives in San Antonio, Texas.

For those that know me, I have a guilty pleasure in being interested in true crime. This is my first foray into the world of true crime non fiction, and it doesn't disappoint. The author is extremely detailed in providing details of the state of Wyoming, which really built up the crime, and I also appreciated that although he may not have known details, he did take pain staking research to record and review what might have happened to Geralds first family as well as setting up tense moments in whether or not they can manage to apprehend the two. I did wish for more details about them, but i enjoyed learning more about forensics and technology that played a role in finding them out.

This was given for a review

4 out of 5
(0: Stay away unless a masochist 1: Good for insomnia 2: Horrible but readable; 3: Readable and quickly forgettable, 4: Good, enjoyable 5: Buy it, keep it and never let it go.)
2019 4 stars Book Review given by publishing company goodreads Non-fiction Paper Form Ron Franscell