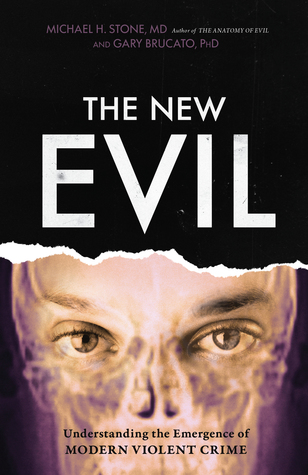 Title of the book: The new evil; understanding the emergence of modern violent crime

Revisiting Dr. Michael Stone's groundbreaking 22-level Gradations of Evil Scale, a hierarchy of evil behavior first introduced in the book The Anatomy of Evil, Stone and Dr. Gary Brucato, a fellow violence and serious psychopathology expert, here provide even more detail, using dozens of cases to exemplify the categories along the continuum. The New Evil also presents compelling evidence that, since a cultural tipping-point in the 1960s, certain types of violent crime have emerged that in earlier decades never or very rarely occurred.

The authors examine the biological and psychiatric factors behind serial killing, serial rape, torture, mass and spree murders, and other severe forms of violence. They persuasively argue that, in at least some cases, a collapse of moral faculties contributes to the commission of such heinous crimes, such that "evil" should be considered not only a valid area of inquiry, but, in our current cultural climate, an imperative one. They consider the effects of new technologies and sociological, cultural, and historical factors since the 1960s that may have set the stage for "the new evil." Further, they explain how personality, psychosis, and other qualities can meaningfully contribute to particular crimes, making for many different motives.

Relying on their extensive clinical experience, and examination of writings and artwork by infamous serial killers, these experts offer many insights into the logic that drives horrible criminal behavior, and they discuss the hope that in the future such violence may be prevented.

Author Info:
(From back of the book)

Michael H. Stone, MD, is professor of clinical psychiatry at the Columbia College of Physicians and Surgeons. The authro of ten books, including THE ANATOMY OF EVIL, he was formerly the host of the Discovery Channel series Most Evil.

Gary Brucato, PhD, a clinical psychologist and researcher in the areas of violence, psychosis, and other serious psychopathology, is the assistant director of the Center of Prevention and Evaluation at the New York State Psychiatric Center/Columbia University Medical Center.

One of my guilty pleasures includes watching and being fascinated by true crime documentaries: that is the psychology behind actions. I am a frequent watcher of deadly women, fatal vows and even watched forensic investigation type show uploaded on youtube. I have heard of one of the authors` scales of evil, and grew fascinated by the idea that not all the crimes nor the people who commit them are the same. Also, years back, I recall reading DIALOGUES OF CRIME, which is a story about a young first offender being placed wih hardened criminals in 1970s because people at the time did not know better, and there was a debate he had with cop about it. THE NEW EVIL does break down the degradation and it's truly something that is worth reading whether or not you are a true crime lover. What is also remarkable is their take on why things have worsened, even if it's not a popular stance among the people of today. Whether or not you agree with authors, this is still an amazing road to travel.

This was given for the review

5 out of 5
(0: Stay away unless a masochist 1: Good for insomnia 2: Horrible but readable; 3: Readable and quickly forgettable, 4: Good, enjoyable 5: Buy it, keep it and never let it go.)
2019 5 stars Gary Brucato given by publishing company goodreads Michael H. Stone Non-fiction Paper Form