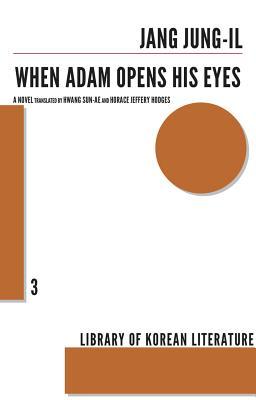 Name of Book: When Adam Opens His Eyes (Adam i nun ttul ttae)

First published in 1990, this is a sensational and highly controversial novel by one of Korea's most electrifying contemporary authors. A preposterous coming-of-age story, melding sex, death, and high school in a manner reminiscent of some perverse collision between Georges Bataille and Beverly Cleary, the narrator of this book plows through contemporaneous Korean mores with aplomb, bound for destruction, or maturity--whichever comes first.

About the Author:
(From the book)

Hwang Sun-Ae and Horace Jeffery Hodges live in Seoul, Korea, and have co-translated several works of Korean literature together. Hwang Sun-Ae has a doctorate in German literature from the University of Munich, Germany, and works as a freelance translator. Horace Jeffery Hodges has a doctorate in history from UC Berkeley, and works as a profesor at Ewha Womans University and as an editor.

1. When Adam Opens His Eyes

A young nineteen year old from 1987?-1988 in Seoul South Korea has sex with women, learns different points of view of music and focuses a whole lot on Korean education system and how much pressure it puts on him and those he knows.

A man and a woman meet at a bank and find out they share the same taste in a book by Georges Bataille (Eroticism) and they began to explore the theories of the book on themselves, albeit going too far.

Umm wow, what did I just read? I'm not sure where to start. First its depressing to realize that the story was published in 1990, when I was either four or five years of age, and here I am reading 26 years later. I think I'll start off with the title first of all, which for some odd reason put me in mind of the biblical Adam before the infamous forbidden fruit scene. Is the book like that? Maybe a little because here we have Jae-hyng (nicknamed Adam by an ex-girlfriend) who starts out the story innocently by desiring a few things, but throughout the story his innocence and hobbies become shattered. I also think its a reference of some sorts to when the eyes are opened, one is no longer blind to the world and they quickly learn to either survive or be killed. I also couldn't help but think of Seo Taiji and the Boys when I was reading the book because one of his popular songs, as I recall, was about the competitive system that Jang Jung-Il's narrator cried out against. (Seo Taiji also arose to prominence in 1990s, two years after the book was published and he could best be compared as a negative influence on students at the time.) What is also a bit eerie, is that it seemed to predict future in an odd way, of how this generation is more focused on speed rather than quality. The second story, maybe because of the biblical reference to Adam, put me in mind of seven days of creation of the world, and it also reminded me a little bit of the beginning of the drama Bittersweet Life where the main male character chokes someone he works for as a sexual high. Still,the stories are not for the faint-hearted, and they still have the power to shock souls.

This was given by Dalkey Archive for an honest review